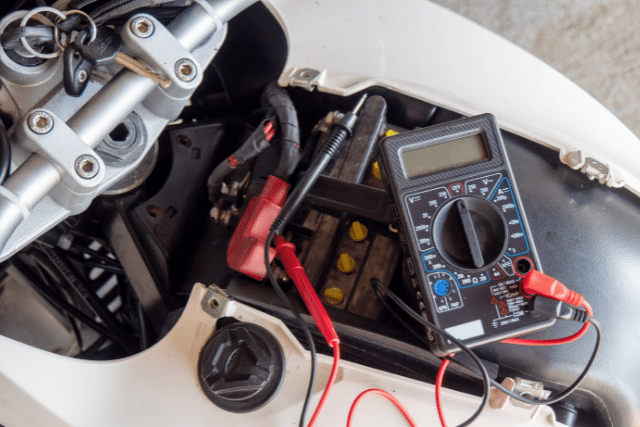 For modern motorcycles, a dead battery equates to a dead motorcycle. If the battery is working, the motorcycle won’t even start!

Forget about other electrical components working.

So, what causes the battery to go dead? The reasons for a dead battery can include battery sulfation, corroded terminals, bad stator, bad regulator-rectifier, bad ground connection, and excess heat and vibration.

Once the battery is dead, the only solution is to replace the dead battery with a new one on your motorcycle.

Along with that, you need to check the root cause and address it as well. Then comes the preventive maintenance to ensure the new battery does not go dead as well.

To address all these factors, let’s dive right in.

What is a dead battery?

A dead battery is a battery that has no charge and cannot hold a charge even if you try to charge it.

In other words, the battery is incapable of charging up. And hence, it cannot provide power. Making it of no use anymore.

That’s what you call a dead battery. It is no more functioning and there is no way to make it work again.

A dead battery is bad news. The motorcycle won’t run without a good battery. Forget, electronic accessories, the bike won’t even start.

That’s why you need to pay attention if the battery is dead, or even not working right.

A dead and a drained battery are often used interchangeably.

A dead battery (like a dead dead battery) refers to a battery that is incapable of charging. Even if you try to charge, the battery won’t charge up.

Then there is the drained battery. Sometimes casually referred to as dead battery again. The charge is drained out, but the battery will definitely charge up if you connect it to a charger.

Reasons for a dead battery in the motorcycle

There are many causes for a dead battery in the motorccyle. Let’s discuss the major ones one by one.

Sulfation is the formation of lead sulfate crystals on the battery’s lead plates and the surface. The more the crystals formed lower will go the battery capacity.

Sulfation in small amounts is okay. Small sulfate crystals are normal in a battery and go away during the recharge.

But large crystals are a problem. They won’t go away during battery recharge and are permanent.

With more sulfation, more crystals occupy the battery. Thus, lowering the capacity down and down until the battery is dead.

Battery sulfation occurs because of one of these two reasons:

Both these cases cause the active lead materials to crystallize, which results in permanently damaging the affected area.

Battery terminals are the electrical contacts that provide power to the vehicle’s electrical system.

If the terminals are not in good condition, expect the battery to not perform well.

That’s why terminal corrosion is a problem. Corroded battery terminals can be very problematic as the current will not flow easily.

Add to it, there might be leakage problems as well in the battery that you need to worry about.

You need to maintain the battery terminals and prevent them from corrosion. Of course, the rise of maintenance-free batteries helps nowadays. Still, if your motorcycle has open terminals, make sure to inspect them from time to time.

A stator, or in this case, an alternator in a motorcycle generates electrical energy in the form of alternating current (AC).

This electric current is then used to charge up the battery. That’s how the motorcycle battery keeps getting recharged.

Now, with a bad stator, there won’t be an electric current that is generated in the motorcycle. As a result, the battery will not charge as well.

Ideally, this should result in a drained battery. And once you charge the battery it should be all well and good. You need to take care of the bad stator though. But that’s it.

But in reality, a bad stator results in a dead battery. It starts with the battery drained, but if left unaddressed, the battery goes bad and dead as well.

The regulator rectifier has two functions:

If either of them is not working properly, the battery is in danger.

The battery needs DC to store the charge. If the rectifier is not converting AC to DC, the battery won’t charge up.

So, it is essential to check for bad regulator-rectifier symptoms and address them as early as possible.

The ground connection between the frame and the battery should be neat.

If not, an improper or poor ground connection will result in battery overcharging.

the last and the least common reasons for a dead battery are excess heat and vibration.

Excess heat and vibration will always have a negative impact on almost all the components.

And the battery is no exception.

The lifespan of a battery is severely shortened when exposed to too much heat or vibration in the motorcycle. Making the battery dead after an overlong exposure.

Symptoms to look for

The first and foremost symptom of a dead battery in a motorcycle is problems with the ignition. You will have starting problems when you want to go for a ride.

Second, dimmed lights and issues in electronic accessories are common symptoms when there is something wrong with the battery. A dead battery is no exception.

Once you have a suspicion that there is something up with the battery, here are the defining symptoms to conclude that the battery is dead.

Third, and a defining one, is bad voltmeter reading. Try measuring the battery voltage using a multimeter. If the voltage reading is zero or almost zero, things are not good.

Fourth and the last defining symptom, try to charge the battery and the battery won’t charge. That’s the final nail in the coffin. The battery is indeed dead.

Along with battery replacement, you must also check for the root cause.

If it is a bad stator or a bad regulator rectifier, you need to fix them as well.

While not much can be done to fix a dead battery, you could definitely prevent a battery from going dead. At least with the new one.

To keep the battery in good working condition, you need to work on some preventive maintenance. This will not only prolong the battery life but also enhances the functioning of electric accessories.

Here are the main preventive maintenance measures for a battery.

While cleaning the battery for maintenance purposes, use a wire brush or sandpaper to clean the corroded terminals. And always wear safety glasses.