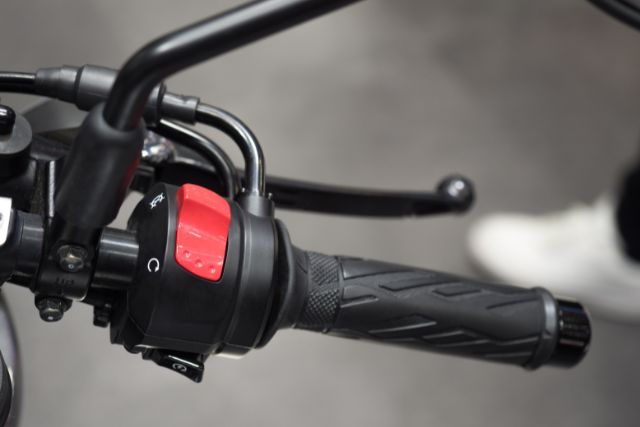 Kill Switch is a red color safety mechanism button on the right side of the motorcycle handlebar. The kill switch is used to quickly shut down the engine and switch it back on without reaching for the keys.

The kill switch is also called an engine cut OFF switch or emergency switch on a motorcycle.

The switch is helpful. It helps the bike rider to switch the engine ON and OFF without lifting their hands from the throttle. It’s particularly helpful in case of emergencies.

Role of a Kill Switch

The kill switch is a red switch situated on the right handlebar of all modern motorcycles.

It is a security fallback that a motorcycle rider can use to stop the engine in case of a crisis.

The naming is vague. The kill switch is also called an engine cut OFF switch or emergency switch, crisis switch or motor shut off/remove (switch). Too many names to keep count on. Let’s stick to the kill switch for now.

An important aspect. Once you switch ON the kill switch, the engine will not stop abruptly. But rather it gradually comes down to a halt.

This is because the engine which was running until that point will take some time to come to a complete halt even after you cut off them.

I know it is a tad bit confusing. Here is a simple illustration that can help in a better way:

Kill Switch Cuts Off the Engine Only

Unlike the ignition key switch, which cuts off power to the entire motorcycle when turned OFF, the kill switch only cuts off the engine.

You can notice it too. Switch the motorcycle headlight on. Or the turn indicators on. Then turn on the kill switch (press it upward). You will still notice the headlight or the indicator lights ON. Only the engine is stopped.

That’s a big difference. Ignition switch ON and OFF affects the power going to the entire motorcycle system – be it the engine or any other accessories.

How Do Kill Switches Work?

The kill switch is introduced to cut the power supply to the spark plug. The spark plug ignites the engine by producing a high-voltage electric spark.

Switching ON the kill switch results in the spark plug not igniting the fuel mixture in the engine. The engine stops.

The capacitor discharge ignition (CDI) unit is responsible for powering the spark plug with high-voltage electricity.

As a result, no more spark ignition. The fuel mixture won’t burn. No more combustion. And hence, the engine stops.

Why Do Motorcycles Need Kill Switch?

Apart from that there are other uses as well.

There are two different ways to stop a motorcycle:

Turning off the ignition is the best way to stop of course. No doubt about that. Switching OFF the ignition also turns off the battery and all electrical accessories along with the engine.

But, what if you want to turn off the engine but not the battery and electric accessories?

You can turn the ignition OFF and then turn it ON. That works. But far easier, just turn the kill switch ON.

Next. If you are stuck in traffic and you want to stop the engine for a short time. Turning the ignition OFF and then ON requires slight effort.

When to Use the Kill Switch

So when to use the kill switch in your motorcycle?

There are two main situation types where a kill switch comes in handy:

Does the kill switch damage the motorcycle engine?

Is it good to use the engine kill switch?

It is a good practice to use the kill switch on the motorcycle. Use it when stuck in traffic or in an emergency situation to turn off the engine. If you are getting off the motorcycle, then use the ignition switch as well.

Is Engine Braking Bad For A Motorcycle? (Answered)

What To Do When Your Motorcycle Burns Engine Oil? (Solved!)