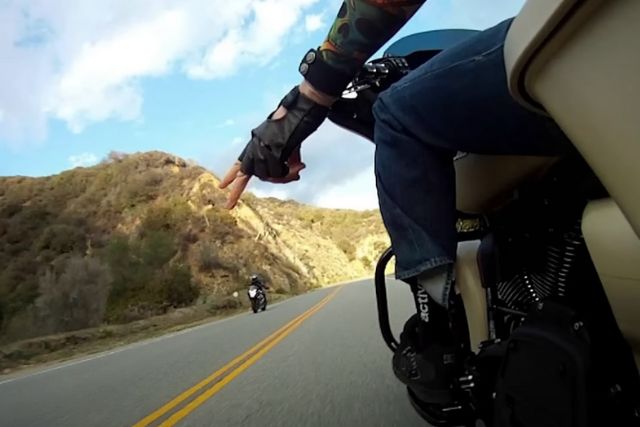 The motorcycle community has some weird gestures. One of them is the hand painting to the ground.

So why do they do it? Why do motorcycle riders point to the ground?

Motorcycle rider pointing their hand to the ground is their way of saying hi to a fellow rider. The gesture also means to keep the two wheels down and ride safe.

It doesn’t end there. There are some interesting tidbits about this gesture.

Why do bikers point to the ground?

Motorcycle riders point to the ground for 3 reasons:

That’s it. It’s a show of respect. From one motorcycle rider to another.

That’s why bikers point to the ground whenever they see another bike rider.

You won’t notice the biker doing the same whenever a car passes them.

It’s a motorcycle code. Kind of at least.

The hand gesture of pointing to the ground is a mark of respect and acknowledgment. From one rider on the road to another.

Should you point to the ground always?

You don’t have to point your hand to the ground every time you see a motorcycle passing by. But, it is a good practice to do so.

I do it. Sometimes I just wave.

There are only 2 exceptions where pointing to the ground can get difficult:

Other than that, I don’t see the harm in not pointing your hand to the ground when you see another rider.

But one tip though:

Wave at all motorcycles. Even the mopeds and scooters.

Don’t be that Harley guy who waves only to other Harley riders.

A brief history of this gesture

There is no clear history of how this hand pointing to the ground gesture by bikers originated.

But there are some interesting bits and anecdotes. Which one do you believe is up to you (I certainly scoff at the first one).

I a not sure which one you believe in the most.

And it’s okay if you think all these stories are crap. No one knows for sure how the trend caught on.

But the point remains. The hand pointing to the ground represents a form of acknowledging a fellow rider.

Other forms of saying hello on a motorcycle

A simple hand wave of course is another common wave that motorcycle riders do.

The hand wave is a simple ‘Hey fellow rider’ thing.

Apart from this, bike riders do a head nod as well.

This is especially popular in countries like the UK where the riding is on the left side of the road.

When you are driving on the left side, the fellow motorcycle rider coming from the opposite direction will be towards your right.

So, you need to wave with your right hand. (With the left hand, the fellow rider may not be able to see the gesture).

But, here is the problem.

Waving with your right hand is a big NO.

Your right hand will be on the throttle. Taking your hand off the bike throttle can get dangerous. Especially if you are on a highway or fast road. Don’t do that.

What’s the alternative then?

Do a head nod. No need for hand waves when you can do head waves. A simple head nod is enough to acknowledge a fellow rider. He/she would understand the reason.

If you are at rest and see a motorcycle passing by, even a thumbs-up works too. 😉

What does a 2 finger wave mean?

The two-finger V gesture is the most common motorcycle wave that riders use.

The V gesture represents peace. And also in the motorcycle community, a way of saying ride safe.

Again, the main point of the wave is to acknowledge a fellow motorcycle rider.

What does patting your head on a motorcycle mean?

If a motorcycle rider pats his head over the helmet, it means the cops are ahead.

It sometimes also means danger is ahead.

But, this pat on the head gesture is rarely used. And is not a common thing.

Why Do Motorcycles Have X on Headlights? (Cafe Racer Thing?)

Why Do Motorcycles Still Use Carburetors? (This Is Why!)