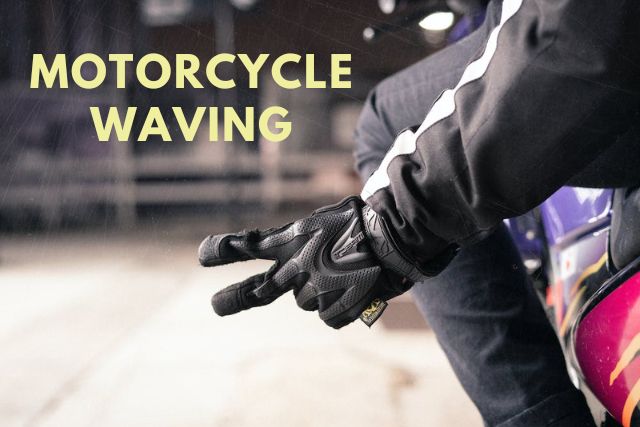 Motorcycle riders wave each other in different gestures. The most common one is the two-finger V gesture signaling peace.

But why do motorcyclists wave at each other? What does the wave mean? The motorcycle wave stands for acknowledgment of a fellow motorcycle rider. The wave also represents a peace gesture and a message to keep the two wheels down and ride safely.

Put simply, the wave is a form of acknowledging a fellow rider.

Over the years, the motorcycle wave has become a cultural thing. Just like motorcycle riders using guardian bells or whips on their bikes.

There is some historical aspect as well to the wave.

Let’s discuss all these in detail.

Motorcycle riders waving at each other

Motorcycle riders passing each other on road acknowledge each other in different forms. Here are a few ways:

All these are acceptable and widely used forms of motorcycle waves.

So, why do they do it? Why do motorcycle riders wave at each other?

The motorcycle wave stands for acknowledgment of a fellow motorcycle rider. The wave also represents a peace gesture and a message to keep the two wheels down the road and ride safe.

Put simply, the motorcycle riders wave at each other as a form of acknowledging each other.

That’s it. You can’t shout a hi while riding since it might or might not be heard. A wave is far more convenient.

Plus, the wave has become a cultural thing now. It’s a common practice to wave at each other.

The two-finger V gesture is the most common motorcycle wave that riders use.

Nowadays, the upside-down two-finger V gesture is common too.

The V gesture represents peace. And also in the motorcycle community, a way of saying ride safe.

Of course, the main point of the wave is to acknowledge a fellow motorcycle rider.

But the cultural significance still remains. Does this wave have a history? We will look into that shortly.

Before that, let’s take a glimpse at other forms of motorcycle waves.

Other forms of waving

A simple hand wave of course is another common wave that motorcycle riders do.

The hand wave is a simple ‘Hey fellow rider’ thing.

Apart from this, bike riders do a head nod as well.

This is especially popular in countries like the UK where the riding is on the left side of the road.

When you are driving on the left side, the fellow motorcycle rider coming from the opposite direction will be towards your right.

So, you need to wave with your right hand. (With the left hand, the fellow rider may not be able to see the gesture).

But, here is the problem.

Waving with your right hand is a big NO.

Your right hand will be on the throttle. Taking your hand off the bike throttle can get dangerous. Especially if you are on a highway or fast road. Don’t do that.

What’s the alternative then?

Do a head nod. No need for hand waves when you can do head waves. A simple head nod is enough to acknowledge a fellow rider. He/she would understand the reason.

If you are at rest and see a motorcycle passing by, even a thumbs-up works too. 🙂

Now, enough with these different waves. Why are these waves such a cultural thing? Is there a history to it? Let’s dig in.

Is there a history to this wave?

There are quite a few stories on how the motorcycle wave gesture originated.

All stories and theories though.

None of these are substantiated and can be said for certain. Let’s start looking at them one by one.

The first one. Quite possibly the most famous one (and a silly one if you ask me).

This is Harley-Davidson’s story.

In 1904, William Harley and Arthur Davidson (2 of the 4 Harley Davison founders) passed each other on motorcycles and waved at each other.

And that popularised motorcycle riders waving to each other on road.

Nice story. But sounds more like a good marketing material than a cultural origin for motorcyclists waving.

Still, this is one of the stories floating around on how the motorcycle waving thing started.

This is the theory I believe in most on how the waving gesture became so popular.

The two-finger wave gesture from motorcycle riders forms a V sign. Which is also a sign of peace and victory.

This is not a coincidence.

A large number of war veterans took to motorcycle riding in the 1950s. The motorcycle clubs became a place for camaraderie for these veterans.

And whenever the veterans riding motorcycles found each other on road, they saluted each other. More often than not, the V sign was the go-to wave.

All these culminated in motorcyclists waving at each other with the two-finger V sign gesture.

This is quite a cultural story. And more believable one as well compared to the Harley story.

But, there are quite a few motorcycle riders who deny that these waving signs existed in the 1950s. This brings us to our last origin story.

Up until the 1960s, motorcycle riders were a niche community.

The motorcycle community had a hippie vibe to them.

While this image had its pros, motorcycle manufacturers wanted their machines to go mainstream.

Then came the efforts by these motorcycle makers to make bike riding palatable to the masses.

The most notable of these efforts is, of course, Honda’s ad campaign. You might have heard the phrase: You Meet the Nicest People on a Honda.

By the late 1960s and the early 1970s, society as a whole started accepting motorcycle riding as a common occurrence.

But, this created friction. What was once this niche, cool, and hippie community of motorcycle riders were no longer exclusive. Motorcycles suddenly had a friendly image. People from all sections of society started riding motorcycles.

Eventually, the friction reduced and the acceptance increased. And one part of this acceptance was the wave sign. The V sign representing peace.

The wave meant we acknowledge you, we belong to the same community, and make sure to ride safe.

Is it mandatory to wave?

Motorcycle waving is not mandatory.

You do not have to wave to another motorcycle rider passing by all the time.

Especially if you are in a country like India or Thailand or countries where motorcycle numbers are high. Where the road is filled with motorcycles. If you start waving, you might have to do it hundreds of times during each ride.

But if you are in the US, the UK, or on roads where motorcycles are not as common as cars – wave at a fellow motorcycle rider.

It’s a good motorcycle practice to wave at a fellow rider. And it’s a feel-good thing.

So next time you are on road, go wave to another motorcycle rider coming towards you.

Wave at all motorcycles. Even the mopeds and scooters.

Don’t be that Harley guy who waves only to other Harley riders.

Why Do Bike Tires Have Hair on Them? (Explained!)

Royal Enfield Not Starting? The Troubleshooting Guide You Need