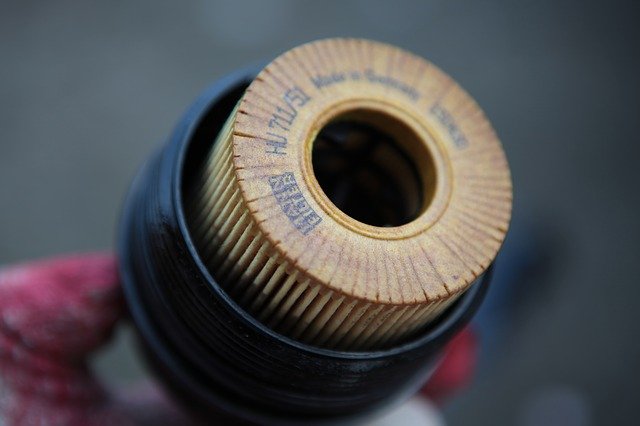 Oil filters are those components you hardly pay any attention to until your motorcycle service guy mentions it.

So, what does an oil filter do in a motorcycle? The motorcycle oil filter basically filters out dust, dirt, and contaminants in the engine oil before the oil enters the engine crankcase. This helps the engine to last long and also for the oil to lubricate components without forming deposits.

Let’s discuss in detail what an oil filter is, what are its functions and uses and do all motorcycle haves oil filters.

What is an Oil Filter?

Oil filter, as the name suggests, is designed to filter out contaminants from the oil. This is specifically significant for engines where oil is required for lubrication and cooling of the engine components.

The oil filter will weed out any dirt, dust, and contaminants from the oil before the oil enters the engine. So, invariably, all vehicles and locomotives which have engines in them contain oil filters.

Also, an engine oil filter is intended to eliminate toxins from not just engine oil, but also from all other kinds of oil including – transmission oil, greasing up oil, as well as water driven oil – depending on the machine and the oil used.

One key aspect to note here is – oil filters are not just used in motorcycles, but almost all vehicles and locomotives that have engines.

Also, having an engine is not a necessity to have an oil filter in a machine. Any hardware that utilizes power through pressure typically has an oil filter to filter and dispose of any impurities in the oil involved.

For more details, here is our explainer on how an oil filter works.

Function of an Oil Filter in a Motorcycle

Now that we know what an oil filter does in general, let’s see what are its functions specifically in a motorcycle.

Motorcycles need engine oil to lubricate and cool down the engine components so that the engine keeps running smoothly and generates power for the motorcycle.

Now, when you pour engine oil into the motorcycle during your servicing, it is most likely that the engine oil will contain lots of contaminants in them.

Broadly the contaminants will be of two types – i) dust and soil particles; ii) metal particles.

Both these contaminants are harmful to the durability and endurance of the motorcycle engine. The dust and soil particles will form sludge and deposit on the nooks and corners of the components. And the metal particles will speed up the engine wear.

Both the soil and metal contaminants should be weeded out from the oil and that’s exactly what an oil filter does. It cleans the engine oil free from dust, dirt, metal particles, and any other contaminants.

How Oil Filter helps the Engine

We now know that the oil filter cleans the oil from dirt and metal contaminants in the oil. How exactly does this help the engine then?

First, removal of dirt, dust, and any other soil particles will prevent deposit formation by these oil contaminants in the nooks and crannies of the engine components. As a result, there won’t be deposit or sludge formation that you need to worry about.

Third, both the above factors translate to a higher endurance and durability for the engine as well as its components. The end result will be higher engine performance, higher mileage, and a better life expectancy for the engine.

Do all Motorcycles have Oil Filters

Not just motorcycles, in fact, all vehicles and locomotives that have an engine in them will have oil filters. Also, machines with heavy oil usage will contain oil filters as well.

To give you a few examples, an oil filter is used in inner burning engines for engine vehicles (both on-and rough terrain), fuelled airplanes, rail line trains, ships and boats, and static engines like generators and siphons.

Other vehicle pressure driven frameworks, for example, those in programmed transmissions and force directing, are frequently furnished with an oil filter. Gas turbine engines, like those on-stream airplanes, additionally require oil filters as well. In fact, the oil business itself utilises filters for oil creation, oil siphoning, and oil reusing.

Oil filter, as the name suggests, is designed to filter out contaminants from the oil.

An engine oil filter is intended to eliminate toxins from not just engine oil, but also from all other kinds of oil including – transmission oil, greasing up oil, as well as water driven oil – depending on the machine and the oil used.

Motorcycles need engine oil to lubricate and cool down the engine components and hence, cleaning oil from contaminants is vital for the smooth functioning of the engine.

As a result, the oil filter helps in higher durability, endurance, and better performance for a motorcycle engine.

Can An Engine Run Without Piston Rings?

Do Motorcycles Have Oil Filters? (Answered!)