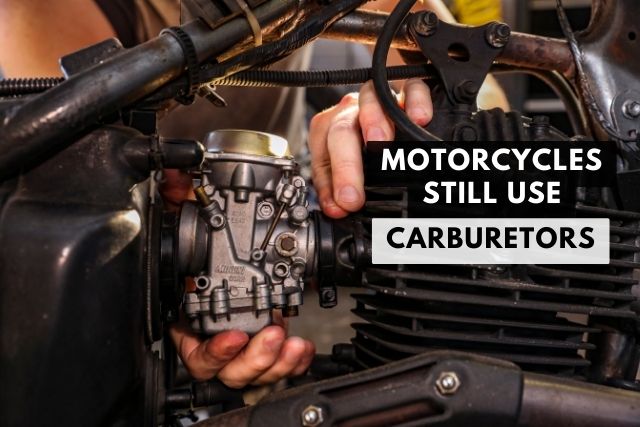 In cars, the good old carburetor died around 20 years ago.

Yet we still see carburetors on motorcycles even today. Why is that?

Why do many motorcycles still use carburetors?

Motorcycles still use carburetors in them because of these advantages a carburetor provides:

Let’s dive into each of these advantages in detail:

Especially if you compare carburetors to fuel injectors.

All things remaining the same, carburetor motorcycles are economical compared to motorcycles with fuel injection systems.

Carburetors operate on a mechanical system.

Mechanical systems are easy to repair. And DIY friendly.

Even the rider who is not a pro in bike repair can do the maintenance, repair, and carburetor tuning.

But, the fuel injector is a complicated system.

Add to it, the ECU components attached to the injector that controls the fuel spraying into the engine. This complicates things further.

Sure cars and diesel engines adopted it since the 1950s. But motorcycles have warmed up late.

The new system along with its complicated design and components makes the fuel injection system difficult to maintain and repair.

The injection system is much more complex and cannot be handled easily by an average motorcycle rider.

Only the pros, motorcycle dealers, and service centers can do the repair and maintenance.

So, for these reasons, carburetors are preferred. They are much easier for repairing and maintenance as compared to fuel injectors.

The fuel (gasoline) in the carburetor flows along a long path.

The flow occurs because of pressure differential.

This pressure differential and longer flow path in the carburetor atomizes the fuel better.

Now, why does this atomization matter?

In the engine, the gas takes time to go from liquid to vapor state.

That’s why the gas needs to be atomized and emulsified before it reaches the engine.

With a carburetor, the fuel travels a long path to reach the engine.

A fuel injector, on the other hand, sprays fuel directly into the engine.

In short, the gas is atomized better with a carburetor.

And atomized gas is better because?

And that’s enough to drive manufacturers to produce more of them.

Purely in terms of numbers, South Asian countries are the largest motorcycle markets.

A good portion of motorcycles sold in these countries (including India, China, Thailand, Indonesia, Philippines, etc.) has carburetors.

It’s a chicken and an egg problem if you ask me.

Carbureted motorcycles are popular because there are loads of them manufactured.

And manufacturers produce them because they bring down the total vehicle cost. The low vehicle cost is a huge driver for sales in these regions. Which makes carbureted motorcycles popular.

But, over time it should come down though.

#5. Engine valves are better off with a carb

Gasoline is a solvent. It has cleaning properties.

So, gasoline dissolves lots of substances. (Just look at the number of gasoline additives)

Okay. Why does this matter?

When the gas flow from the carburetor to the engine, it goes through the engine intake valve.

When it hits the intake valve, it also dissolves any dirt and deposits formed on the valve.

But, the same cannot be said about the fuel injection system.

Even within fuel injection, there are different types.

With port fuel injection, the gas goes through the intake valve. So no problems here. The gas dissolves the dirt and deposits.

But the same cannot be said about direct fuel injection.

With direct fuel injection, the fuel is sprayed directly into the engine. The dirt on the intake valve has no gas hitting on them to dissolve.

The accumulated dirt and deposits affect the intake valve’s performance and longevity.

This is another area where the carburetor is better than the fuel injector.

So, maybe, the carburetor in a motorcycle is not so bad after all.

#6. Carburetors are easy to replace

Carburetors do not contain any electronic components.

This disassociation with electronic components makes them easy to remove. And then replace them with new ones.

Whenever your carburetor is damaged, you can easily replace it. Take it to your mechanic or DIY to replace it with a new carburetor.

But, that’s not the case with fuel injectors.

Fuel injectors, on the other hand, are ECU controlled.

They have many electronic components attached.

This association with electronic components and the ECU makes the fuel injector a difficult component to replace in a motorcycle.

Whenever your fuel injector is damaged you must have to take it to the motorcycle service center or an expert mechanic to replace the fuel injector with a new one.

While the replacement of fuel injectors may get easier with the passage of time, currently carburetors are far easier to remove from the motorcycle and replace with a new one.

There is no doubt a fuel injector is better than a carburetor.

That doesn’t mean carburetors are good for nothing.

If you want high performance, for sure, a fuel injector is the best.

But if you are tight-budgeted, a carburetor is the preferred option. Going for carbureted motorcycle is not such a bad thing at all.

You can even argue that engine longevity will be much better with a carburetor.

As discussed earlier, engine inlet valves are for sure better off. The gasoline from the carburetor helps the valve clean out any deposits formed.

The same cannot be said about the fuel injector.

I am not arguing carburetor is better than a fuel injector. The fuel injector is the better component. There is no doubt.

What I am arguing is – the fuel injector is not the best in all aspects.

And the carburetor is not that bad.

And it’s okay to have carburetors in motorcycles.

Bottomline: Which Is Better?

There is no doubt fuel injection is a better system than carburetors.

Carburetors on the other hand come at a low cost, requiring minimum maintenance, easy replacement, and are economical.

If you are aiming for high performance, the fuel injector is the preferred alternative. And if you are tight budgeted you can opt for carburetors.

But either way, carbureters still find their uses. And that’s the reason motorcycles stills use them.

Now that you know the importance of carburetors, here is a detailed comparison of fuel injectors vs carburetors.

The Mysterious Reason Why Motorcycle Riders Point to the Ground