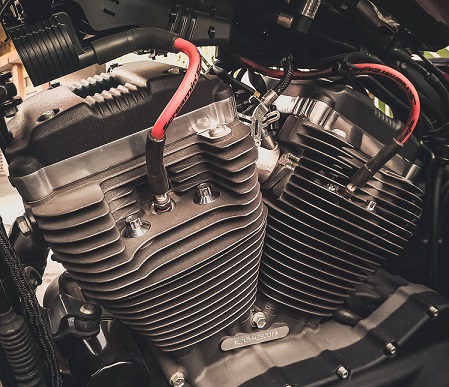 You might have noticed many old motorcycle engines or the current lower cc engines having fins on them. Although most modern motorcycles use liquid cooling and no longer rely on fins, we can still see them on motorcycles with air cooling systems.

And that’s why even liquid cooled engines have fins since they speed up the heat dissipation through natural air circulation.

If you want to deep dive into how fins cool down the engine, let’s deep dive.

Fins are thin extrusions or appendages attached to a larger structure or a component.

Normally fins are used for either of the two purposes – i) to produce lift or thirst, or ii) to increase surface area to accelerate heat transfer.

The usage of fins to produce lift and thirst can best be seen in a fish. The fins act as locomotive organs and produce thrust and lift to generate motion in the water.

Another popular usage of fins to produce lift and thrust are in turbines and propellers. Here, these components use rotating fins, also called foils or blades, to generate rotating motion.

Now, the other usage. Fins are also used to increase the surface area to accelerate heat transfer. This attribute of fins is what we see in motorcycle engines.

The fins in the motorcycle engines are used for dissipating the heat generated in the engine. Fins provide a larger surface area over which the air can circulate and take away the heat.

In a motorcycle engine, the air-fuel mixture gets combusted and produces the energy required for the functioning of the motorcycle. Along with that, heat is also generated in the combustion chamber.

As a result, the temperature in the combustion chamber increases rapidly.

Now, for the engine to function smoothly and to last longer, the temperature needs to be brought down to lower levels. The heat generated needs to dissipate as fast as possible.

If at all, the heat is not dissipated, the effects on the engine can include overheating, knocking, misfiring, pre-ignition, etc. Even the piston rings, cylinder walls, engine valves could be damaged.

In order to dissipate the heat generated and bring down the temperature, motorcycles have cooling systems.

There are mainly 2 types of cooling systems used.

While liquid cooling system is the most effective one and is used in most modern motorcycles, air cooled systems can still be seen in numerous motorcycle models.

Air cooling is usually found in older motorcycles or motorcycles with lower capacity engines. The basic premise here is to allow the air circulation to take away the heat generated from the engine.

The heat needs to be transferred from the engine to the air. To expedite this heat transfer, manufacturers use ‘cooling fins’ on the engine casing.

The purpose of these fins is to conduct the heat generated from the engine and transfer it to the air passing over them. The increased surface area will make the heat transfer faster.

Now, how the heat transfer is made faster and the cooling is improved is explained in the below section.

How Do Fins Help Engine Cooling?

Now, we know that air cooled engines have fins attached to the engine casing. But, how exactly do these fins help in the heat transfer process?

In order to understand this phenomenon, we have to dig deeper into the heat transfer process.

Here, the heat transfer is taking place from the engine case to the air. That is, from a solid boundary to a fluid.

This type of heat transfer, where the transfer is due to bulk fluid motion along the surface of a solid boundary, is called Convection heat transfer.

Ts: Temperature of the Solid Boundary in Kelvin (K)

Tf: Temperature of the fluid in Kelvin (K)

As a result, the dissipation of heat is much faster with fins than without fins on the engine.

That’s why you should clean the fins as well if there is lots of dirt and grease accumulated – to prevent engine overheating.

For these reasons, Fins play a huge role in cooling the engine and form the backbone of air-cooled systems in motorcycles. The larger surface area provided by the fins speeds up the heat transfer process, which in turn cools down the engine faster.

With the improvements in technology, cooling systems have changed over the years. Air cooling systems are now restricted to lower cc engines or you can see them in older motorcycles.

Most motorcycles nowadays have liquid cooling engines. A liquid cooling system uses a liquid coolant that circulates through internal passages and channels built within the crankcase.

The coolant used in liquid cooling systems should have cooling, anti-corrosive and anti-freezing properties. There are several coolants available out there in the market. However, it is always advised to use the one your motorcycle manufacturer has recommended.

Liquid cooling systems are more complicated when compared to air-cooled systems since they require radiators. However, the complicated design is more than compensated by efficiency, low noise and vibrations, and improved performance.

Disc Brake Vs Drum Brake – Which Is Better In A Motorcycle?

7 Reasons Why Motorcycle Gloves Are Necessary (Wear Them!)