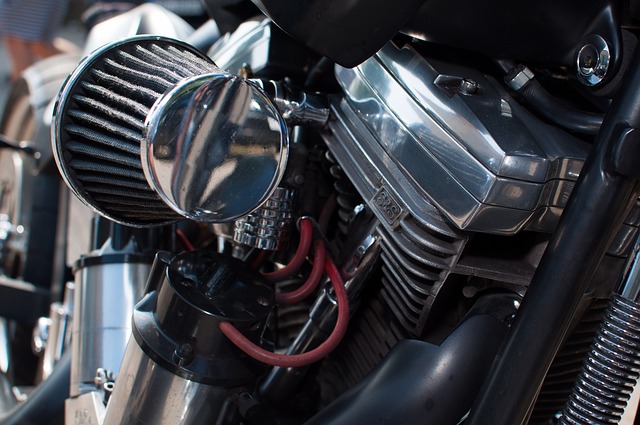 That’s why you need to change the air filter whenever it is not functioning.

So, how do you know if your motorcycle needs a new air filter? The air filter in a motorcycle has to be changed whenever there is too much dirt on the filter which has resulted in its blackening. Other indicators for changing the air filter include too much of exhaust misfiring, power lags, and reduced mileage and horsepower.

Usually, the color of air-filter will be either yellow or white. Most importantly, the filter will definitely be of light color. This helps us in gauging the amount of dirt accumulated on your filter.

If there is too much dirt, the filter will be blackened. The turning of light color, mostly yellow or white, to black gives us the indication that the filter has accumulated too much dirt.

#2 Too much of Exhaust Misfiring

Another major indication that your air filter in the motorcycle needs to be replaced is when there is too much of exhaust misfiring.

Now, the exhaust misfiring or popping can also occur in high air flow exhaust system motorcycles. However, the presence of unburnt fuel is always required for detonation.

As a result, some of the fuel enters the exhaust system unburnt. When this fuel meets the air present in the exhaust, they burn and detonate to cause misfiring.

Since lack of sufficient air is the foremost cause for such a detonation in the motorcycle, the air filter needs to be checked whenever thee exhaust backfire occurs too much.

And for this reason, too much of exhaust backfiring and popping signals that the air filter needs to be checked and might be damaged.

#3 Motorcycle Mileage and Horsepower has decreased

However, when you have a damaged or non-functioning air filter, the horsepower generated by the motorcycle decreases.

And along with that, the mileage of the motorcycle decreases as well.

If your motorcycle horsepower and mileage has reduced in the past week or so, then it is a very good indication that the air filter needs to be checked.

This reduction in both horsepower and fuel mileage is because of insufficient air-fuel mixture entering the combustion chamber. The damaged air filter won’t let sufficient air into the inlet valve and injection system.

As a result, a rich air-fuel mixture enters the engine. But due to insufficient air, the fuel entering the engine wont burn completely. There will be lots of unburnt fuel that goes as a waste. Thereby resulting in lower horsepower and mileage.

So, if you are experiencing reduced horsepower and mileage in the motorcycle, then the air-fuel mixture entering the engine is not right. And when air is the problem, the answer most definitely for the issue is air filter.

Power lag happens when at higher speeds your motorcycle won’t accelerate despite you throttling up. The power generation won’t take place even when you accelerate. This power lag usually happens beyond 2000-3000 rpm.

This power lag can be another indication that the air filter in your motorcycle may not be functioning properly.

Whenever the air filter is functioning properly, it won’t let sufficient air to enter into the injection system. The inlet valve won’t receive an appropriate amount of air since the air filter is blocking the air along with the dust particles.

So, if you are facing a power lag, then clogged air filter – which is preventing sufficient entry of air – is the main culprit.

That’s why, whenever you face power lags while accelerating your motorcycle, it is better to open and check the air filter for whether it has clogged. If the air filter is clogged, then you need to either clean it or if blackened with too much dirt, you have to replace it with a new one.

Effects of a Damaged Air Filter in a Motorcycle

Whenever you have a clogged, dysfunctional, or damaged air filter in your motorcycle, the foremost impact will be on the air-fuel mixture entering the engine.

Inappropriate air-fuel ratio will impact the engine performance and results in low mileage, horsepower, fuel efficiency and the overall performance of the motorcycle.

In addition, the inlet valve, carburetor and the fuel injection system will start deteriorating as well. A clogged air filter, if left unchecked, will lead to a carburetor filled with dirt as well. The petcocks and the fuel lines can get clogged as well. And the only solution will be to dismantle the carburetor from the motorcycle and clean it, which can be a daunting task.

Skinny Tires vs Wide Tires – Which Tires are Best for Motorcycle?

Here’s How To Calculate The Mileage Of A Motorcycle