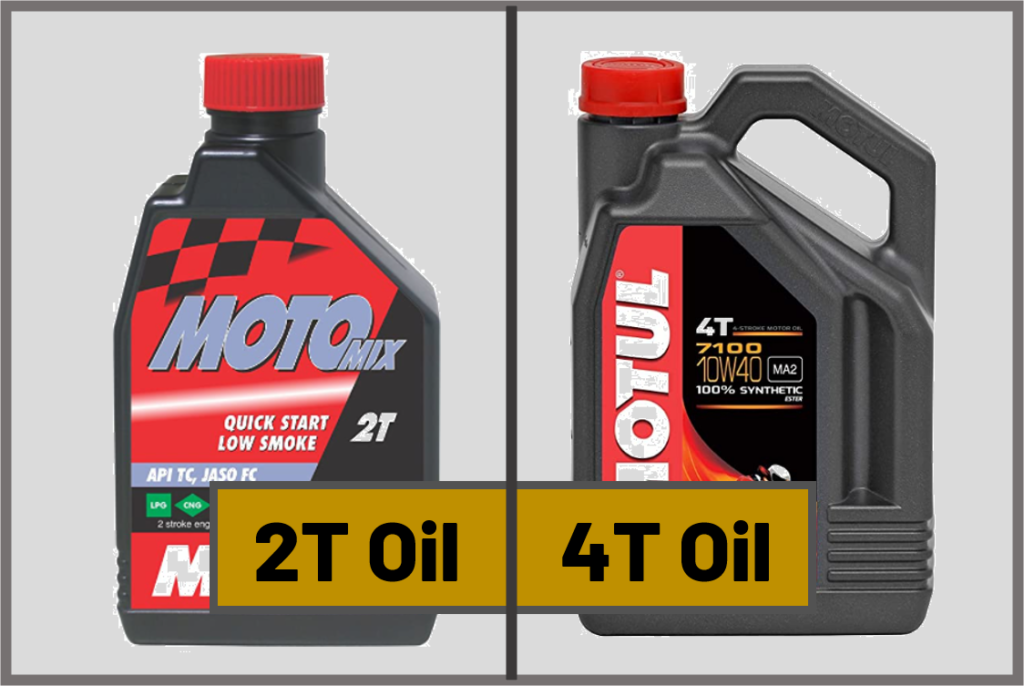 Engine oils are essential to lubricate and cool down the engine components. A 2T and a 4T oil are oil types used for different types of engines.

Since a 2T oil is added to the fuel, they burn in the engine and exit with the fuel vapor as exhaust. As a result, they have low flash point and low viscosity levels.

4T oils are not mixed with the fuel and added separately to flow into the engine crankcase. They have higher flash point and higher viscosity levels when compared to the 2T oils.

Let’s deep dive into both these oils and their differences in detail.

Put simply, 2T oil is the engine oil to be used specifically for two stroke engines.

A 2T oil has very different chemical characteristics when compared to that of a 4T oil.

This is because, in a two stroke engine, there is no separate crankcase that can segregate the engine oil away from the fuel.

Here, the oil is mixed with the fuel and is allowed to burn and pass through the exhaust.

As a result, 2T oil is not separately filled in a gearbox or oil passage, but rather is added to the fuel tank. The oil flows with the fuel in the engine, lubricates the components, and then gets burnt in the combustion chamber and flows out through the exhaust.

Since the four stroke engine segregates the air fuel mixture and the lubricating engine oil – fuel mixture in the combustion chamber and oil in the crankcase, there is no burning of the 4T oil.

In fact, it is a bad symptom of engine functioning if the 4T oil gets burned, which can be noticed from the white smoke coming out of the exhaust.

To put it in simple terms, 2T oil and 4T oil are exclusively used in two stroke and four stroke engines respectively.

What is the difference between 2T and 4T oil?

Let’s discuss the differences between 2T and 4T oils based on these parameters – mixing with fuel, burning in the engine, fash point, viscosity of the oil, and the ash content.

As discussed in the previous sections, 2T engine oil is added to the petrol/gasoline. The 2T oil mixes with the fuel and then enters the two stroke engine.

On the other hand, 4T oil should not be mixed with the fuel. The oil is added in a separate oil channel which travels across the crank case and lubricates the four stroke engine components.

So, a 2T oil is mixed with the fuel whereas a 4T oil is added in a separate channel altogether.

4T oil, on the other hand, is segregated from the fuel in the engine. While the fuel burns in the combustion chamber, 4T oil lubricates the engine components from the crankcase. The chamber and the crankcase are separated by the piston rings by sealing the gap between the piston and the inner cylinder walls.

As a result, 4T oil remains separated from the fuel and does not burn in the combustion cycles. If at all there is any oil burning, it is a bad sign and should be looked into why the oil is getting burnt and addressed immediately.

Flash point is the temperature at which the material ignites when contacted with an igniting source.

Since 2T oil is supposed to burn in the power stroke in the engine, 2T oils have a lower flash point. This helps in them burning along with the fuel easily and then exiting through the exhaust system.

However, 4T oils have higher flash points. They are not supposed to burn in the engine. Rather, they are designed to withstand combustion cycles relentlessly and continue to lubricate the engine components from the crank case.

Viscosity changes even within these oils. Viscosity is a measure of resistance to flow. It can also be described as the internal friction of a moving fluid.

Different oil grades for each of the 2T and 4T oils will have different viscosity levels. For a detailed description of oil grades, here is our guide on motorcycle engine oil grades.

Typically, a 4T oil will have a higher viscosity level when compared to a 2T oil. A 4T oil needs more viscosity since they flow in the crank case and lubricate rather than flowing with the fuel and burning like a 2T oil.

A 4T oil usually has higher additives when compared to that of a 2T oil. A 4T il is expected to lubricate for longer periods of time whereas a 2T oil lubricates very shortly and burns away.

As a result, a 4T oil has higher additives and higher ash content than a 2T oil.

Here is a summarised table of differences between a 2T oil and a 4T oil.

2T oil and 4T oil are not interchangeable and hence, should not be used in place of one another.

A 2T oil is specifically made to mix with fuel and to be used in two stroke engines only. On the other hand, a 4T oil should be used in four stroke engine motorcycles only and is not mixed with the fuel.

A 2T oil has very different chemical characteristics when compared to that of a 4T oil. A 2T engine oil is added to the petrol/gasoline and is mixed with the fuel in the two stroke engine.

As a result, 2T oil burns in the engine and exits through the exhaust just like the fuel, have low flashpoint, low viscosity, and low ash content.

A 4T oil, on the other hand, is added separately and does not mix with the fuel and burn in the engine. A 4T oil has higher flashpoint, higher viscosity levels, and higher ash content when compared to a 2T oil.

25 Important Reasons Why Your Motorcycle Is Not Starting

How To Clean Motorcycle Engine Fins?