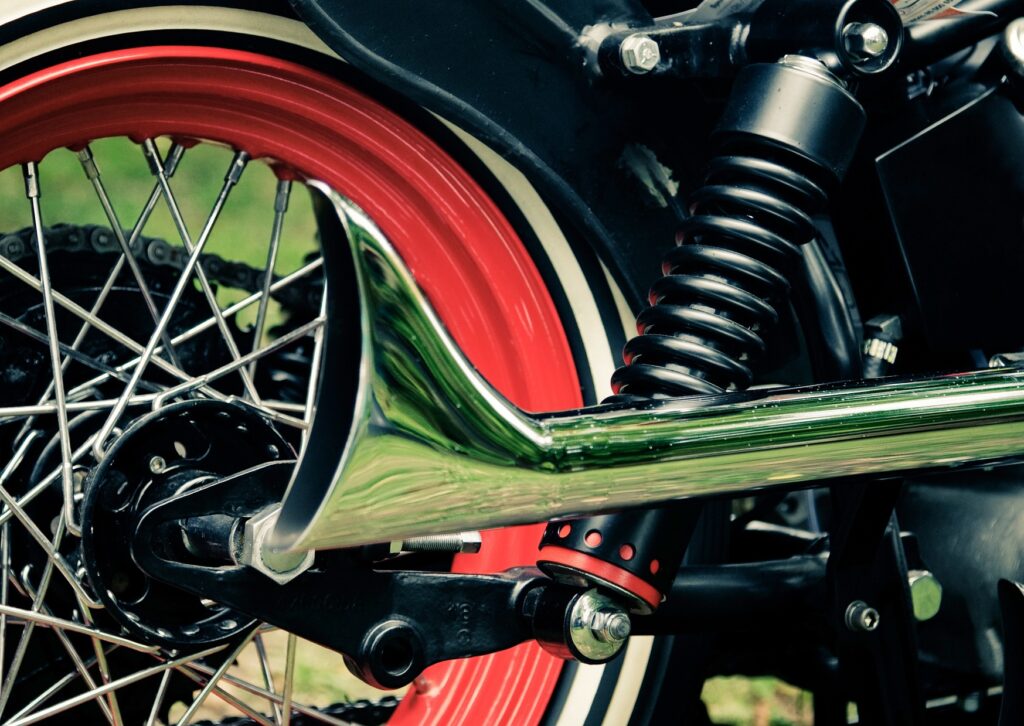 Modifying exhaust units is a popular upgrade that many motorcycle riders undertake. Exhaust wrap, re-chroming, coloring, powder coating, straight pipe exhausts, slip on exhausts are few of these modifications that are widely implemented.

We are going to talk about straight pipe exhausts in this post.

Straight pipe exhausts are not recommended since they produce high decibel noise and are harmful to the environment.

Let us deep dive into what a straight pipe exhaust is and why is it bad to have in a motorcycle.

What Is A Straight Pipe Exhaust?

A straight pipe exhaust contains a single exhaust pipe running from the exhaust header all the way to the end without a muffler and catalytic converter to reduce noise and harmful emissions.

Now, when you make changes to your exhaust unit and opt for a straight pipe exhaust, what you will be doing is – remove the muffler and catalytic converter and allow the mid pipe to run from header to all the way to the end.

Since straight pipes do not have a muffler and catalytic converter, they are bound to produce high decibel noise and harmful emissions.

Both these noise and emissions from straight pipe exhaust can land you in trouble for being non-compliant with the law and regulations.

Similarly, the exhaust gases coming out of the straight pipe exhaust most likely will not pass the regulatory emission standards. The absence of catalytic converters may prove costly in controlling harmful emissions.

Is A Straight Pipe Exhaust Good Or Bad For Motorcycle?

Straight pipe exhausts are not good for motorcycles since they produce high decibel noise and harmful emissions.

Although straight pipe exhaust improves the looks and aesthetics of the motorcycle, this alone isn’t compensating enough for the negative impact it has through noise and emissions.

Not to mention, it might land you in trouble for being non-compliant with noise levels and emission standards.

Before delving into that, let’s look at what good does a straight pipe exhaust do for a motorcycle.

Advantages of a straight pipe exhaust

The main advantages of a straight pipe exhaust are:

For bike riders who love loud roaring sounds coming out of their motorcycles, straight pipe is just the right exhaust unit for them.

Apart from these two, there aren’t many advantages of a straight pipe in a motorcycle. Few may argue the resulting low weight and improved performance due to muffler removal, but there are no clear evidence or research backing this claim.

Disadvantages of a straight pipe exhaust

Now, lets talk about the cons of a straight pipe exhaust. We have already touched upon this.

The main disadvantages of a straight pipe exhaust are:

Since straight pipe exhaust have their mufflers removed, the noise levels will be far higher than the usual motorcycles.

Similarly, since catalytic converters are removed from straight pipe exhausts, harmful gases will be emitted to the outside environment.

Both these high noise and emission levels in straight pipe exhausts run the risk of being non-compliant with noise or emission standards set by local authorities.

Not to mention, straight pipe exhausts are extremely costly to install in a motorcycle.

Common wisdom suggests silencers muffle excessive decibel noises from the engine and also add to the aesthetics of the product. Now, the decibel aspect is mandated by law and its conformity is enforced by designated authorities.

While the exact decibel range varies according to the region, the Motor Vehicle (MV) rule book specifies that the maximum sound permissible for motorcycles ranges from 80-91dB.

In broader perspective, there are scores of models of two-wheelers to choose from the markets these days.

Owners or riders of motorcycles with noisy silencers exceeding the approved limits risk being fined and the offending parts dismantled and destroyed by authorities.

The noise output can cross 120-130dB in machines with modified or illegal free-flow mufflers.

You may have experienced by now that street legal sports motorcycles look and sound completely different when compared to say with an adventure or touring motorcycle or an urban scooter.

The adage is applicable to other styles of two-wheelers that have distinctive or signature exhaust notes. Some are high pitched and some are barely audible.

That’s not just what silencers are supposed to do apart from conforming to legislation. There are other specific job functions it has to do.

What remains unseen is the engineering and science that’s gone inside these innocent looking metal creations that offer form with function.

Exhaust systems are not just bolt-on or afterthought products in modern machines. They are customised for each machine. This is in contrast to a few decades ago where the one-size-fits-all strategy was used across models by manufacturers.

As it’s not just about showing off anymore. The most significant aspect is that all exhaust systems are calibrated to maintain a certain level of engine back pressure and decibel conformity.

As a result, muffler design is now considered both art and science.

Design relates to how the silencer looks and complements the overall appearance of the machine.

Common to all motorcycles, scooters and moped is a pipe from the header (exhaust port), a muffler/silencer unit, collector box (in multi-cylindered machines) with sensors and embedded catalytic converter. Multi-cylinder motorcycles have even more complex exhaust systems.

Stock exhaust systems are designed by specialists in the trade and they come with a multitude of hardware like baffle plates, layers of filters and sound-deadening material like glass or ceramic wool.

In short, not a job for the faint-hearted or unprofessional roadside metal tinkerers or shortcut makers of fakes or duplicates!

Why Does Back Pressure Really Matter?

After all, isn’t it about just encouraging exhaust gases to move out of the system? Yes, it is and all this good science combined with engineering has a specific purpose.

It’s there to ensure scavenging efficiency of the engine and its long-term health by optimising back pressure.

As part of the performance engineering considerations, back pressure is directly affected by speed of the engine, exhaust valve opening, exhaust port dimensions, exhaust pipe location and position, dimensions of catalytic converter and muffler design.

Back pressure figures therefore are different for all machines and it depends mostly on the engine type.

With the transition from mechanical carburettors to sensor-based sophisticated fuel injector systems in modern motorcycles, the task of meeting parameters of an engine is a critical objective for engineers.

Back pressure is like a necessary evil. It’s there because it is essential to get rid of burnt gases and ensure correct back pressure. This in turn ensures fuel consumption and output performance is not jeopardised.

While most motorcyclists are more than happy with the stock exhaust set-up, there’s alway a group that wants to be different — whether it’s for aesthetics or just sound enhancement for fun.

To enhance exhaust sound of a motorcycle is not exactly rocket science but managing its after-effects are.

Deliberately or unwittingly tampering with manufacturer’s back pressure calculations can bring in catastrophic results for the engine.

What Happens When You Remove Stock Silencer Box

Among the many popular options to make the motorcycle sound louder is to either modify or remove the stock silencer or muffler unit while leaving the header pipes unmolested.

The marginal weight loss to some may be attributed as a free of cost bonus for fuel efficiency!

Without doubt, the machine will sound louder after removal of the silencer/muffler unit.

Technically, it gets transformed into a free-flow system and has certain fall outs.

To begin with, one must realise that after the stock exhaust system becomes a free-flowing type, it can actually decrease the specified output of the motorcycle despite the change of its decibel performance.

Loss in marginal performance is usually accepted by audiophiles who may overlook the drop in performance of their machine.

Custom bike makers tend to modify the exhaust pipe from the manifold end. They may increase the inner diameter of the pipe, cut it short or lengthen it. Whatever is done, the stock machine’s performance figures get altered permanently.

However, things can get more complicated and risky in the case of multi-cylinder motorcycles with advanced fuel injector and catalytic converters.

And here’s why: The design of the header pipes is complicated as they have crossover tubes to help harness pressure waves in neighbouring pipes to broaden the range of power available.

In some advanced machines there’s even a valve in the crossover that will open at a certain RPM. Then you have the collector box which serves as the baffle and also houses the catalytic converter.

Fuel injected motorcycles depend on oxygen sensors which are threaded into the collector box. Air temperature and altitude information for fuel injector is also provided by these strategically located sensors.

Some high performance motorcycles have servo-controlled valves before the muffler unit that helps regulate  back pressure so that the rider may access the machine’s torque curve and also control its noise output.

Removing the silencer box, collector box and sensors will confuse the electronics and can cause the motorcycle engine to malfunction.

Manipulation of back pressure is commonly practised in sports like MotoGP to boost mid-range power and torque.

Some high performance machines (like KTMs) don’t even offer the muffler unit as it becomes more of a cosmetic issue than functional after the valve mechanism manages noise and back pressure requirements.

Besides these technical aspects, there are other issues to contend with like manufacturer’s warranty for the current range of BS VI technologies and the illegal removal of expensive catalytic converters.

Despite the disadvantages of removing silencers altogether, some enthusiasts are not dissuaded and will still go-ahead and modify the exhaust system.

Besides, fitting them on a modern motorcycle with fuel injector set-up will require remapping the ECU, controller and sensor units. These aspects are for professionals to take care of or for those who have requisite technical skills and proper tools.

Most popular among them are set-ups, a free-flow or baffle-free type arrangement in single-cylinder motorcycles. So, just removing the collector box and catalytic converter set-up for the sake of louder fun can end up pretty expensive for the owner of the motorcycle.

Aftermarket exhausts that make the motorcycle louder may be subjected to restricted use. They may not necessarily conform to decibel legislation for street use and hence be deemed as illegal by the motor vehicle department authority.

The flip side is that if the motorcycle is new, its warranty could become void if defects/problems are found to be caused due to unauthorised exhaust modifications.

Eliminating the silencer box in modern multi-cylinder motorcycles for having fun may not be as easy as it sounds given the engineering complexities.

Many motorcycle riders may not be aware of the fact that back pressure is a critical and unseen element for the motorcycles’ engine to perform flawlessly. Repairing or overhauling an engine is not cheap and so are the fines!

Trying to operate a fuel-injected motorcycle without a muffler is definitely not advisable as it becomes a complex task that really doesn’t offer tangible benefits.

Rather high decibel motorcycles are considered a nuisance in society and cops are always on the lookout for rowdy riders who break the law and slap them with hefty fines.

It’s fine for track day events where a free-flow set-up is allowed in controlled situations. A straight answer to whether keeping a motorcycle exhaust with just a straight pipe and running it is good for the health of the machine is a bit more complicated considering factors like manufacturers warranty and catalytic converter issues.