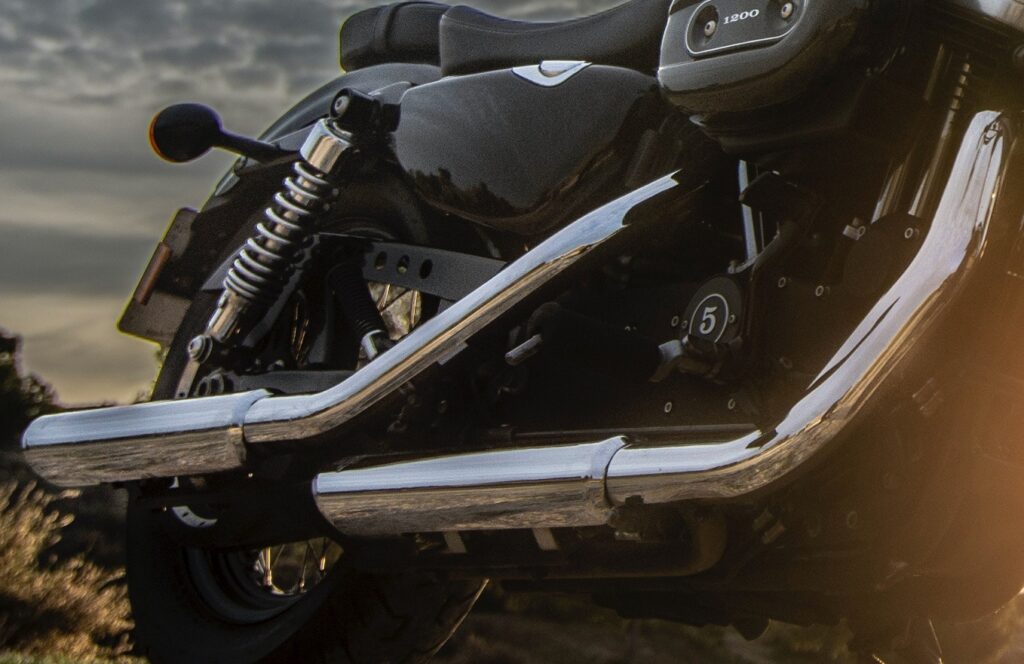 Exhausts were discovered in the late 1800s and back then they were used only to put out the burnt gas from the motorcycle.

As time passed, engineers worked on exhausts so that they can do more than just redirecting the harmful gas away from the bikes. Thus, exhausts underwent drastic modifications to arrive at their present look and design.

Exhausts come in different varieties that vary in their functions.

Based on the type of exhaust you choose for your motorcycle, the exhaust weight, performance and noise varies.

Here are the different types of exhausts and their functions.

Straight or drag pipe exhausts are the most common exhausts that are found commonly in motorcycles.

These exhausts have a single header and a single exhaust. The single pipe acts as the sole passage for exhaust gases to escape out from the engine chamber to the outside atmosphere.

Dual exhausts are usually found in heavy motorcycles like Harleys.

In dual exhaust, the two cylinders are attached to two different exhausts. As a result, the exhaust gases don’t have to rush through a single exhaust, thus improving the motorcycle mileage and performance.

On the flip side, dual exhausts increase the weight of the motorcycle.

#3: Two Into One Exhaust

Two into one exhausts have two headers connecting to a single exhaust. These exhausts are lighter than a dual exhaust.

In addition, they also increase the performance by effectively taking away the back-pressure.

These types of exhausts are heavier but some motorcycles perform better with these exhausts.

#5: Four Into One Exhaust

Four into one exhausts have four headers connecting to four cylinders.

These four header pipes then merge into a single pipe before connecting to the collector. These exhausts greatly reduce the weight and are preferred in some motorcycles to increase performance.

Before understanding how the exhaust performs all of those functions let’s dig into different exhaust parts first.

The exhaust gas from the engine enters these pipes. These pipes move along the engine and release those gases into the collector. It also helps in reducing the backpressure.

Collects the gas from the header pipes. Here the conversion of harmful gases and noise reduction (to some extent) happens.

These are located near the collector. They sense the amount of oxygen present in the exhaust and send feedback to the engine whether it is using more or less fuel.

Just before the muffler, there is a servo-controlled valve that regulates the backpressure as well as noise.

These are components that regulate the noise and backpressure. They are housed inside the muffler.

Now that we have a brief idea about different exhaust parts, here is how exhausts work and keep the motorcycles in healthy conditions. We go through the mechanism part by part here.

Functions Of A Motorcycle Exhaust

Since we have already touched upon the uses, parts and explained the mechanism of of the exhausts, here is the recap on the functions of a motorcycle exhaust.

When it comes to performance, backpressure is a very important thing to consider.

In the exhaust system, the Butterfly Valve plays a major role in regulating the back-pressure and hence the bike performance. It is a new addition to the OE exhaust system.

Many people replace the OE exhaust with an Aftermarket exhaust for the following reasons.

Yeah, aftermarket exhausts can give you all that. BUT, in most countries they are illegal.

This is because aftermarket exhausts are found to cause high air pollution and noise pollution.

The OE or factory exhaust can’t give you all those because they have to follow emission guidelines provided by the government.

As a result, these exhausts have to put a limit on the dB and a check on harmful gases. However, after market exhausts do not guarantee to comply with these stringent emission guidelines.

How To Choose An Exhaust

Nowadays the OE exhausts also provide better performance along with following all the guidelines from the government.

But to install an aftermarket exhaust, you need to get approval from the local regulatory body.

That’s why if you want to go for an aftermarket exhaust for better performance, you should think again. In some countries, installing after market exhausts are downright illegal.

If it is just about changing the exhaust looks, you can consider only changing the mufflers. That should work just fine.

Despite all these obstacles. if you still want to go for an after market exhaust for your motorcycle, here are few things to consider.

How To Take Care Of Motorcycle Exhausts

Exhausts get exposed to high temperatures of the exhaust gas, external factors like dust, water etc, so they do get decolourized and that’s natural. But if you want to avoid that you can by using double-wall pipes, a coat of heat-protective shields or fibreglass tape etc.

Nowadays the factory exhausts also consider the performance while controlling the noise and the type of gas that goes out. So, purchase an aftermarket exhaust system only for their looks and sound. But make sure that you are not breaking any laws.

Here’s What You Need To Know About Trail Braking

Why Do Motorcycles Have Multiple Carburetors?