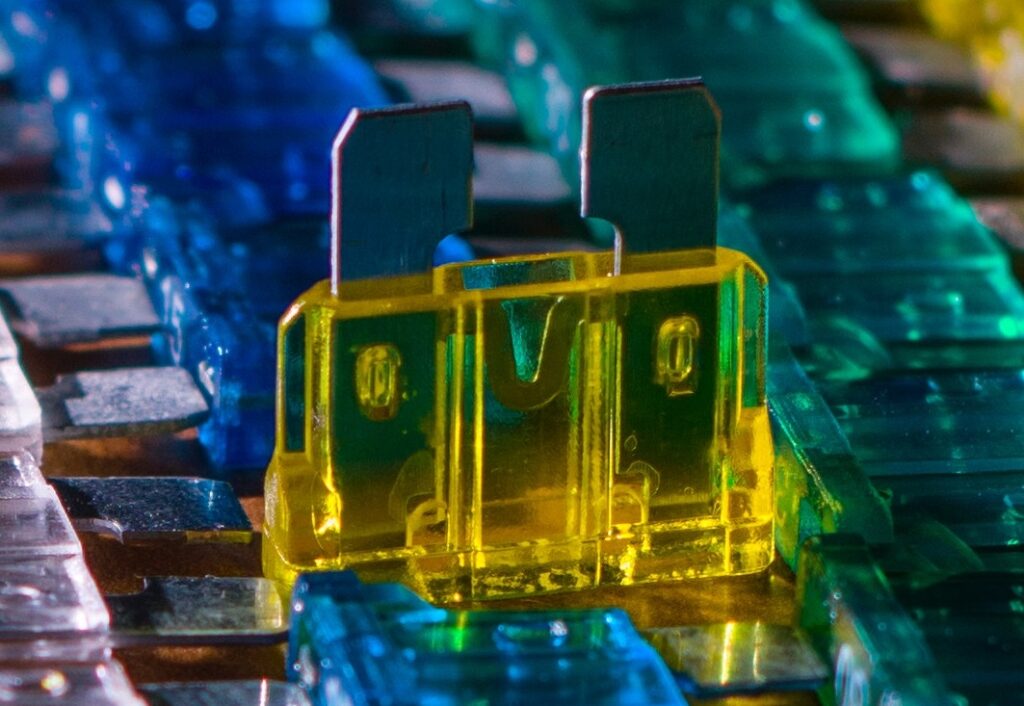 A blown fuse in a motorcycle will cause an electric system or an accessory to stop functioning. Sometimes, a blown fuse can result in the bike not starting as well.

So, in this blog post, let us deep dive into:

Without further ado, lets deep dive into the post.

#1: Motorcycle Fuses – What Do They Do

In this section, we will discuss:

What Are Motorcycles Fuses

A motorcycle fuse is an electrical safety device that protects a circuit from over current.

Whenever the current exceeds the required levels in an electric circuit, the circuit will be damaged. So, fuses are used a protection device for the circuit.

If there is an overcurrent in the electric circuit, then the fuse sacrifices itself and blows out to safeguard the circuit.

Once a fuse is blown, you can replace it with a new fuse of the same rating. If there is no fuse, the entire circuit would be damaged and has to be repaired or replaced, which can be a costly affair.

That’s why, a fuse is so important in an electric system.

The modern electrical systems invariably use and incorporate fuses in their circuits.

And motorcycles are no exemption.

Since there are various electric circuits in the motorcycles, they need fuses to protect them against overcurrent.

Whenever there is excess current passing through, the fuse will blow out to protect the circuit.

As there are many circuits, there will be many fuses with each fuse safeguarding each circuit in the bike.

That’s why fuses are so essential for the motorcycle electric system. If there are no fuses, the electric accessories and the units would be damaged very often. Their repair cost would be high as well.

Where Are The Fuses Located In A Motorcycle?

Most motorcycles have their fuses covered in a box. This box is obviously called – fuse box cover. Duh!

The fuse box cover is located directly below the seat and beside battery.

To get the fuses, you need to remove the seat first and open the fuse box cover.

Many motorcycle manufacturers also provide additional spare fuses to use. These fuses are covered up attached nearby either to the fuse box cover or near the battery.

So, if you have a blown fuse, you need not worry about buying a new fuse since there are spare fuses provided by the manufacturer.

Only once you run out of these spare fuses as well, you need to start buy some new fuses.

#2: Causes And Symptoms Of Blown Fuses In Motorcycles

In this section we will discuss:

Why Do Motorcycle Fuses Blow?

Simply put, motorcycle fuses blow when there is higher current amperage than the circuit can handle.

The fuse gets blown up because of any of these problems in the electric circuit.

These failures in the circuit will make the fuse to blow up and as a result, the fuse removes the power from the faulty system.

The circuit will start operating as soon as the fuse takes the load and blows up.

The fuse will sacrifice itself to protect the circuit from damaging.

For each circuit, there is a rated amperage. You can check these current ratings on the fuses where they will have markings like – 7.5, 10, 20, 30.

These numbers on the fuses are their circuit’s amperage rating. If the current exceeds the rating, the fuse will blow up and gets damaged.

So, for a circuit that operates on 10 ampere current will have its fuse rated 10A. If the current passing through the circuit exceeds 10A, the fuse will get damaged.

Once the fuse is blown, you need to replace it with a fuse of the same ampere rating.

If you replace it with a lower ampere rating fuse, the fuse will blow up again easily since the circuit operates at a higher current amperage.

And if you replace with a higher ampere rating fuse, the circuit will get damaged since the fuse won’t protect from an overcurrent as it is less than the fuse current rating.

To give you an example, for a blown fuse of 10A, you must replace it with a fuse of 10A rating. If you replace with a 7.5A fuse, the fuse will blow up since the circuit operates at 10 amperes current.

And if you replace with a 20A rated fuse, the circuit will get damaged whenever there is an overcurrent of, say 15 amperes. The fuse won’t find any overcurrent problem since it is rated 20A and won’t protect the circuit from getting damaged.

Why There Are So Many Fuses?

If you open the fuse box cover, you will notice there are many fuses in there.

A motorcycle typically contains 6 to 15 fuses depending on the model and the electric systems used. Each fuse is connected to different electric circuit in the bike.

All these fuses are related to different electric circuits.

Some of the common fuses found in a motorcycle are –

There are many other fuses that comes depending on the motorcycle manufacturer and the model.

Typically, the main fuse is separately located from the other fuses to provide the distinction.

Symptoms Of A Blown Fuse

Now, how do you get to know that the fuse is blown in your mtoroccyle?

You can’t be sure the fuse is blown unless you actually check the fuse.

However, there are other symptoms from which you can get an idea that the fuse might have blown and need to be examined.

First, if a fuse is blown, then the electric circuit with which the fuse was connected will not work.

So, for a blown headlight fuse, the headlight won’t work.

If the battery is not charging in the motorcycle, a blown fuse can be a reason as well.

In case the main fuse is blown, then the motorcycle will not start at all.

While there might be many causes for a motorcycle not starting, a blown fuse is a major cause as well.

So dysfunctional electric accessories and systems should you tip you off to check for a blown fuse in your motorcycle.

Next thing you need to do is to actually check the fuse cover box for a blown fuse.

#3: Checking And Replacing A Blown Fuse

In this section we will look into –

How To Tell If The Motorcycle Fuse Is Blown

For inspection and checking the fuses, you need to remove them out of the motorcycle first.

Here is a step-by-step procedure to examine a motorcycle fuse.

Then remove the seat and open the fuse box cover. You can now check the fuses.

If a fuse is blown, you need to replace the fuse of the same rating.

Replacing a fuse with one that has a higher rating greatly increases the chance of damage to the electrical system.

So always use the fuse with the same ampere rating while replacing.

If a fuse fails repeatedly, your motorcycle likely has an electrical fault. Have your vehicle inspected by your dealer.

Steps To Replace A Blown Fuse

To replace a blown fuse in your motorcycle, follow these steps if you are doing it yourself.

In case you are not sure and are not well versed with bike components, take your motorcycle to your dealer or the service shop. It will save a lot of time.

Step 1: Turn the ignition OFF

Next, you have to remove the bike seat. You need to start by removing the bolts and then pull the seat up and backward to take out the seat from motorcycle.

Once you have removed the seat out, it’s time to open the fuse box cover next. Fuse box cover is typically located right beside the battery. Once you find it, open the cover and you will see the fuses arranged within the box cover.

Step 4: Check for the Blown Fuse

Now, it’s time to pull the fuses out one by one with the fuse puller in your tool kit. You need to check for a blown fuse within these multiple fuses.

And the strip will remain intact if the fuse is working properly and has NOT blown.

You must always replace a blown fuse with a spare fuse of the same rating.

Few motorcycles provide spare fuses which are located near the battery. So, check for spare fuses near battery in cases you have been provided with them.

Now, once you have replaced the blown fuse with a new one, reinstall the fuse box cover back to its place if you have taken it out. Or just close the box cover if you have kept the box in its original position.

And lastly, reinstall the seat again and tighten the bolts. Make sure that the seat is locked securely in position to pull it up lightly.

In this section, we will look into:

What Should You Do If The Motorcycle Fuse Keeps Blowing Repeatedly?

If the motorcycle fuse keeps blowing repeatedly, it is because either of the two problems.

If you are using a wrong rated fuse, then you must replace it with a new fuse of right current rating.

A fuse rated 10A should always be replaced with another fuse of 10A. Using both lower rated or higher rated fuse will cause problems wither to the fuse or to the circuit.

Are Motorcycle Fuses And Car Fuses The Same?

The type of fuses used in a motorcycle and the car are same.

However, the amperage of the fuse should be taken care of when using the fuses of one vehicle to another vehicle.

You can’t replace a 10A fuse of a motorcycle with a 20A fuse of a car. The amperage rating of the fuse should match perfectly.

Once you take care of the amperage rating, the fuses of a motorcycle and car can be used interchangeably.

If you suspect your motorcycle fuse is blown or damaged, check the fuse first by removing the seat and opening the fuse box cover.

On the other hand, if the metal strip is not broken, then the fuse is in working condition.

Check for all the multiple fuses in the bike and if any one of them is broken, replace it with a new fuse.

You will usually find spare fuses beside the fuse box cover. Make sure your replacement fuse has the same amperage rating as the old one.

You should always replace with a fuse of the same current rating.

Once replaced, place the seat back and now you are good to go rise your bike again.

Why Is My Motorcycle Battery Not Charging? Easy Beginner Guide

How Long Does A Motorcycle Battery Take To Charge? (Solved!)