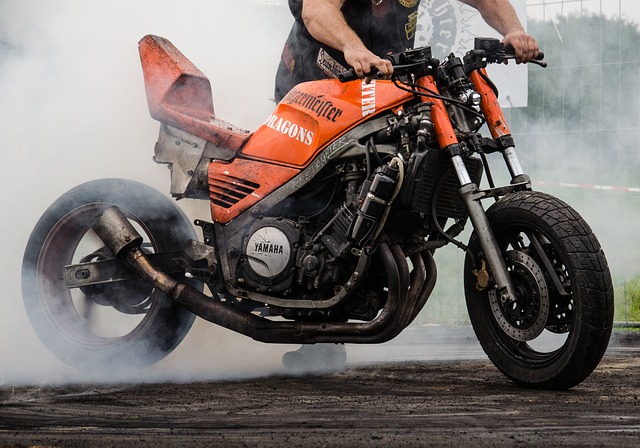 A group of enthusiastic motorcyclists seem to be enjoying a casual ride on a highway.

Some are keen to overtake each other from time to time, which is quite normal. While they overtake, you  note burbles or popping sounds from the exhaust from some of the high pitched fast moving machines.

Such burbles or popping sounds from motorcycles are more pronounced on race tracks or in controlled demonstration events where the riders and machines entertain the audiences.

At these places, the audiences are treated to high-pitched engines screaming and blips from exhausts especially whenever there’s a throttle manoeuvre accompanied with a swift gearshift — mostly down shifts.

Occasionally, these pops or blips may be accompanied by a flame flash from the exhaust tip. A bit of orchestrated pyrotechnics one could say for the masses!

Such entertainment on a race track does attract a dedicated audience, but frightening to the uninitiated.

So, what’s all this about? Is it a natural phenomenon for a motorcycle engine or is it deliberately orchestrated?

What is this exhaust popping during motorcycle deceleration?

These are some of the questions that may pop into one’s mind. And if it does, it’s quite natural for those of you who have interest in motorcycles that entertain in particular or for an owner rider worried about his/her machine.

The physics behind this is actually quite simple. In theory, when unburnt fuel is combusted in say exhaust header that is other than the combustion chamber of the engine, then this popping phenomenon will happen.

In most high-performance motorcycle engines, exhaust gases can reach temperatures up to a whopping 900 degrees Celsius. 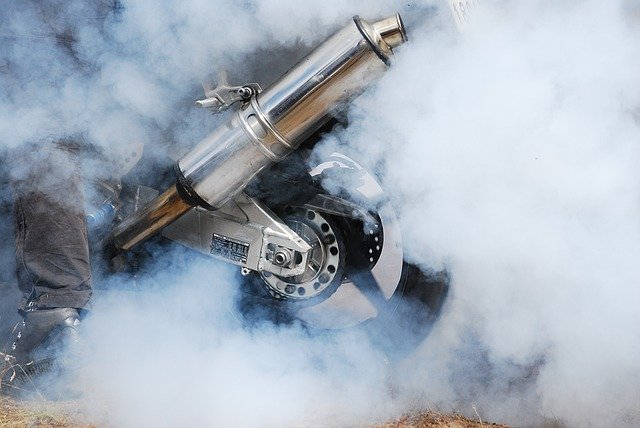 In this set-up, gases expand fast and when they exit the exhaust, a popping sound is created due to the creation of pressure waves that aid in unburnt fuel being burnt up in milliseconds.

Most modern motorcycles use four-stroke technology where fuel injectors feed the fuel for combustion. Engine hardware specifications may differ for say pistons, bore, stroke, crank weight, valves and camshafts. But in principle, they operate on similar philosophies.

So, how’s it (blipping or popping) done?

In most machines, it’s basically how the rider is able to trick the motorcycle into getting extra fuel in the cylinder by manipulating the throttle or accelerator.

Depending on how the throttle is used, smart riders are able to get some extra fuel in the system which gets ignited along with the hot gases exiting from the exhaust.

As a prerequisite for the show to happen, exhaust popping can only happen when the engine and exhaust system both are hot and running. Exhaust popping will not happen on a cold machine or if the engine is running on idle.

What’s the role of fuel-to-air ratio and does it impact?

In a way yes, as in most motorcycles, be it production or custom built, the fuel to air ratio fed into the cylinder for optimal combustion and efficiency is approximately 14.7 to 1. This concentration ratio is by weight and when you have more fuel than 1, it would be a fuel rich condition.

Likewise, the opposite holds good for lean fuel mixture situations that don’t ignite that easily in the combustion chamber and moves out into the exhaust via the valves.

Here, it remains as smog and gets self-ignited when there’s sufficient quantity of fuel in the mixture and enough heat.

During deceleration, the amount of throttle by the rider is reduced resulting in a momentarily change in the air to fuel ratio in the engine. This means you have a faster running engine getting less fuel in the combustion chamber. And hence, vacuum is increased due to this ratio change of fuel and air momentarily.

It also means less air and fuel available inside the cylinder during the power stroke. Two things happen within seconds.

First, there’s accumulation of non-burned fuel in the exhaust, and then you have burnt fuel being ejected into the hot exhaust, which results in auto ignition or backfire. In cases, where popping is accompanied by a flame, it’s popularly known as an “after fire.”

Is backfiring or popping noise from exhaust natural? Or is it pointing to some future problem in the motorcycle engine?

Backfiring is perfectly normal and should actually be expected especially if the machine is tuned for lean air-to-fuel ratios.

Remember, it’s the correct ratio of fuel and air that is critical to optimize engine combustion. Too much of either will result in an engine that’s either running rich or running lean.

And neither of which is a good thing in the medium to long term for the engine.

Is it possible to engineer such a set-up?

The straight answer is yes. Some riders may want to impress their friends with exhaust popping in stock machines and there are some easy ways to make that happen.

It works best with some modifications to the breathing apparatus and exhaust set-up. The idea is to create a lean mixture situation. Think of it akin to a camp fire where you add more oxygen by fanning it.

How to go about it without breaking the bank?

There are several ways and the final results will be determined on the basis of your motorcycle’s engine set-up. It’s all about managing the flow of fuel/air and exhaust gases.

It could be made possible by a combination of an aftermarket slip-on free-flow exhaust and a K&N filter. In most cases, no engine re-mapping is required.

I have seen flames accompanying pops and blips. How can I get the same effect in my machine?

Many tech-savvy enthusiasts and industry professionals have actually taken the exhaust popping experience to the next level by adding more visual drama like flames by designing hardware and software systems.

In fact, there’s a whole aftermarket now that has got into this business of entertainment, so to speak. You will need to buy a ‘flame-kit’ that’s easily available on-line or in specialist shops.

As the market is flooded with various types of flame kits, it’s always a good idea to do some research before hand.

A good quality flame kit uses a 12V high tension coil for creating the spark, a spark plug with adapter that will be mounted on the exhaust box, wiring, safety switch and rev limiter hardware and a relay-operated small fuel reservoir.

As a safety precaution, never ever attempt to feed fuel to the flame kit from the main fuel tank.

In most racing or track events, the ignition cut method is preferred as a fool-proof safety precaution.

Can a flame kit be fitted by a DIY or does it need professional installation?

Experienced DIY people with experience can install the kit safely. Not advisable to be done by amateurs as safety aspects are a big consideration. Best to get the flame kit installed by professionals and ensure safety of the engine.

Motorcycles fitted with catalytic converters and stock exhausts— will it work?

Yes, it will. Flame kit can be fitted in motorcycles with catalytic converters and stock exhausts.

But you may not hear it as the exhaust note may be muffled. It will work better with open exhausts without catalytic converters.

Is it legal to have this kit on the motorcycle?

There’s no definite answer to this. Since it involves removing the catalytic convertor, the warranties offered by the manufacturer could become void and motor vehicle authorities may slap fines or seize the motorcycle.

Such activity should be reserved for track day or in controlled and safe environments. It’s better to avoid such show-offs on public roads.

How do I get rid of exhaust popping in my motorcycle?

If the backfiring problem persists then hardware check is recommended. Begin with the spark plug, ignition wiring, air cleaner, check the butterfly play (repair or replace if required), adjust and lubricate throttle cable, check and fix any vacuum leak from exhaust header. Also check the exhaust port gaskets and studs that hold the exhaust pipes.

Fixing these correctly should help alleviate the irritating backfiring and its after effects.

Is prolonged popping or backfiring harmful to the engine?

If your motorcycle is being used for commuting purposes, frequent backfires and afterfires (even though they serve as entertainment) must be attended to.

Newer motorcycles have fuel-injectors so what could go wrong here?

If a sensor malfunctions, it will impact the air-fuel ratio and cause sluggish or delayed combustion.

Faulty or clogged fuel injectors that supply too little or too much fuel to the cylinder can also create a poor fuel-air ratio.

Is Motorcycle Backfire Bad? Here Is What You Need To Know

Is Motorcycle Easy To Learn? A Helpful Guide