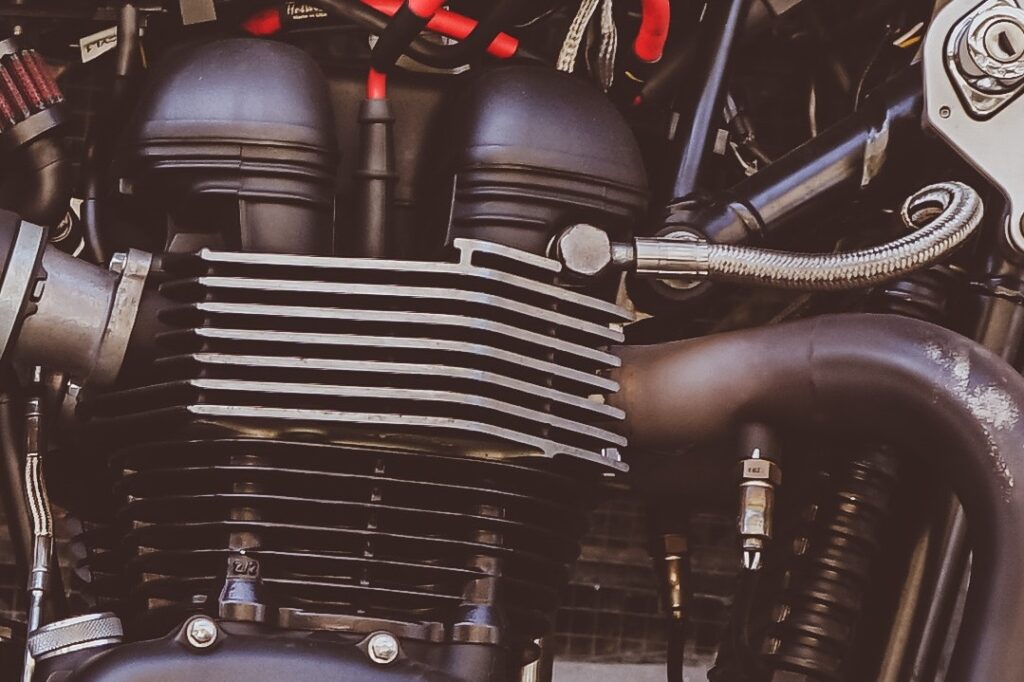 Engine fins in motorcycles help in heat dissipation of the engine through air circulation over its elongated surface area.

Dirt and grease accumulation on the fins will result in engine overheating since fins are not dissipating heat properly. You need to clean the dirt from the fins.

So, how to clean motorcycle engine fins? The main steps involved in engine fins cleaning include:

Before diving into each of these steps in detail, let’s first look into why fins need cleaning and what are the prerequisites.

Why do engine fins need cleaning?

Engine fins are made of aluminum. The engine itself will be either made of cast iron or aluminum alloys. For more details, here is our explainer on materials used for an engine block.

Due to the fins exposure to external weather and mechanical fluid, dirt builds on it over time.

There are mainly two instances in which the engine fins need cleaning.

Engine fins take a long time to get dirty. However, once the dirt and grease accumulate, this dirt accumulation makes them less effective as the passage of air starts to get blocked out and if the dirt accumulated is a grease base then it attracts more dust particles from the surroundings if not cleaned at the earliest. The cleaning of fins increases both the engine shell and the engine life as well.

What should you know before cleaning fins?

Cleaning fins is easier said than done. The process involved in the cleaning is very simple. But there are some important tips one should know before heading up towards their motorcycles.

How to clean engine fins?

There are a lot of different ways of cleaning engine fins. But each one of them corresponds to the condition in which the fins are in.

The condition of fins could be known by doing an external examination and reviewing the cleaning cycle it has had to date. Even after so many exceptions, the base cleaning of fins is the same. Several techniques are to be followed for cleaning engine fins.

#1: Allow the engine to cool down

Even after having fins, the engine gets heated up. This heat lowered by fins is beneficial for the engine but the heat left behind is still harsh for our skin.

Cleaning a motorcycle directly after driving can result in burns and injuries. So the best way of avoiding it is to allow the motorcycle to cool down before you start working on it.

The type of dirt built up on the motorcycle fins depends on its maintenance cycle. The dirt can vary from light to heavy. To cut through such dirt we need to formulate our own suitable cleaning mixture.

This mixture must have lukewarm water, grease-cutting dish soap, or liquid. You can also add vinegar, baking soda, and a few drops of lemon to enhance the degreasing abilities.

The first step of cleaning should start with spraying water on the fins. The water pressure should be as high as possible.

The high water pressure will help the water to cut through thick layers of dirt and make them loose. But care should be taken during this process. You need to avoid spraying into electrical wiring, air boxes, air filter, and other parts that are prone to water damage.

Brushing is the main step in cleaning engine fins. Once you have sprayed water to loosen up the dirt and removed a few dirt layers, it’s time to brush and clean the remaining dirt and grease on the fins.

Brushing should always be done layer by layer, starting from the top fin and moving downwards. The brushing should be done with gentle strokes.

The brush has to be cleaned with water as soon as one layer is cleaned, to avoid dirt from sticking on the next layer. Dip the brush in the cleaning fixture for each layer of cleaning.

#5: Water cleaning to wrap up

Once you have brushed the dirt away from all the fin layers, there is only one last step remaining. Spray the high-pressure water using jets to clean the fins.

That should be more than sufficient for a thorough engine fins cleaning. If you are interested in more aesthetics, you can use a buffing polish to polish the fins.

Why is it important to clean engine fins?

To keep the engine running for longer periods, the heat from the engine should dissipate properly, and clogged fins prevent this from happening. So engine fins should be cleaned regularly for easier heat dissipation from the engine.

Are radiator fins and engine fins the same?

Radiator fins and engine fins are not the same.

The working process of both the fins is similar. Both the fins are used to direct the wind. But the placements of both these fins are different. Radiator fins are placed in front of the radiator and engine fins are embedded in the engine shell.

How to remove oxidation from engine fins?

To remove oxidation from fins or any part of the engine, the required ingredients are acid and baking soda. Start cleaning the engine with acid and then finish off by spraying a mixture of baking soda and water.

What parts should I cover before cleaning?

Before cleaning the engine fins, you should try to cover every sensitive/ non-water resistant part. Parts such as the battery, ignition wires, engine control unit, and all the other electrical components need to be protected.

How to remove white corrosion from the aluminum engine?

White or any kind of corrosion can be removed by combining distilled water with pure lemon juice or vinegar and then gently rubbing the mixture over the affected area on the fin or engine surface.

What Does 2T And 4T Mean In Motorcycle Oil? (Differences)

Can An Engine Run Without Piston Rings?