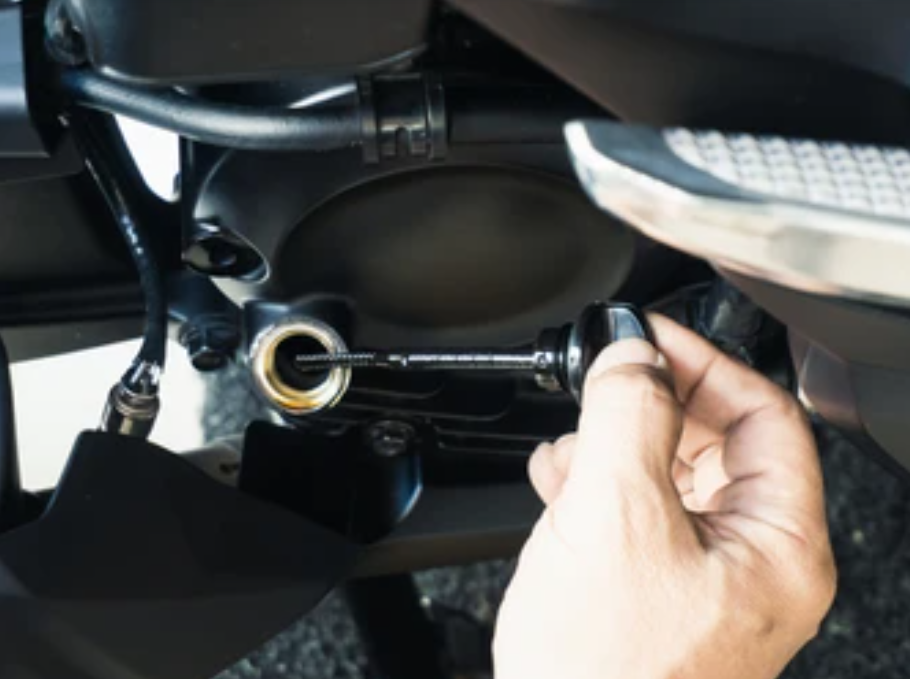 Engine oil both lubricates and cools down the engine components, which helps in the engine performing smoothly for the motorcycle.

Engine oil needs to be changed regularly and should be frequently checked for low oil level in the motorcycle.

Here is a detailed stepwise approach on how to check the engine oil level in your motorcycle.

The reason why you need to park on a flat surface is because if the road has rough terrain or it is a steep path with a considerable slope, the checking of oil levels won’t give precise and accurate results.

Next, this is an optional step. You can choose to skip it. However, if you are also intending to check the quality of the engine oil, then you should follow this mandatorily.

Idle the engine for 10 minutes and then allow it to cool down for 15 minutes. This step is to warm up the engine oil and then cool it down. A recently worked up engine oil will provide a better result, specially while checking for oil quality.

Again, if you are only checking the oil level, you can choose to skip this step of idling and cooling down the engine.

Now, it’s time to check the engine oil level in your motorcycle.

Remove the oil gauge from the motorcycle. If the oil gauge is fixed too tight, you can remove it with the help of pliers. Once you remove the gauge, clean the gauge since the oil level reflected will not be clear as it will show at full levels. This is because the oil flows under pressure inside the motorcycle and the flow will make the entire gauge wet.

Now, the oil gauge will be marked with two levels. The top mark is for ‘full’ and the bottom mark is for ‘low’.

Ideally, the oil level should be between the top and bottom marks, i.e., falling between the full and low oil levels.

Clean the oil gauge first since it would have been completely wet dues to the pressurized oil flow in the system. Once you have cleaned the gauge, place back the oil gauge but do not screw it. Just place the gauge back and allow it to get wet by the engine oil at the current level.

Now, remove the oil gauge. You can check the engine level now by checking the wet mark on the gauge. That should provide you the engine oil level in the motorcycle.

If the wet mark of the oil is between the ‘full’ and ‘low’ marks of the oil gauge, then the engine oil is at right level.

If the oil wet mark on the gauge is below the ‘low’ mark, then the engine has low oil level. It is time to change or top up the oil.

To summarize, when the oil wet mark is –

Apart from directly checking the oil level from the engine oil gauge, you can also infer low oil level in your motorcycle based on some symptoms.

In some modern motorcycles, an easier and an alternative way to directly check the oil is these bikes have sensors attached to indicate the engine oil levels. However, most motorcycles do not contain these sensors and the rider has to rely on other symptoms to infer low oil level.

Overheated engine and hence, the increased temperatures are another symptom for low engine oil levels.

Another symptom but a drastic one is engine seizure. If your bike engine has seized, insufficient engine oil in the system is the likely reason.

How Far can your Motorcycle go with Low Engine Oil?

Not much. An approximate distance of 40 miles to 50 miles can be traveled when a motorcycle has low engine level.

You will be lucky if the motorcycle stops running right after the engine has run out of oil.

If, on the other hand, it runs for 50 miles, you are going to have a headache due to the damaged engine parts. There will be permanent and premature wear on these components. And some of them can prove costly to you.

However, keep in mind that running on such low oil levels is actually harmful to your bike which will come back to haunt you in the long run.

Here are the effects of low engine oil level in your bike.

How To Check Engine Oil Quality In A Motorcycle? (Step-by-Step Guide)

Are Motorcycle Engine Guards Worth It?