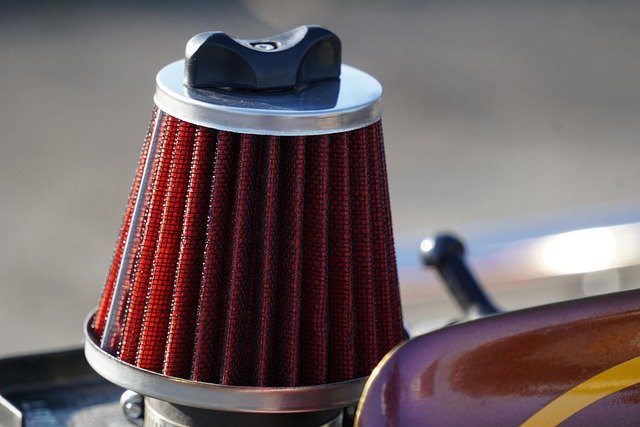 A clogged and blackened air filter is always a nuisance.

The restricted air entry due to the clog trickles down to various problems across the motorcycle parts. Too many annoyances just because the air filter is not clean enough.

Having said that, let us dig deep into what a clogged air filter will do to a motorcycle.

Effects of a clogged air filter

A clogged air filter will result in a rich fuel mixture in the engine combustion process. This leads to a lot of inconveniences ranging from low fuel efficiency and engine power to exhaust overheating and power lags. Each of the effects of a clogged air filter is detailed below.

#1: Engine runs rich and consumes too much fuel

When the air filter is clogged, the first thing that happens is – that not enough air gets into the engine. The clogged filter is just not allowing sufficient air entry.

As a result, the engine receives too less a quantity of air.

This has twofold effects. First, the engine will run a rich fuel mixture. That is, too much fuel and too less air. There will be incomplete burning in the engine since the required air quantity is not met.

Continuing from the previous point, the fuel consumption increases because of a clogged filter. All because the engine will run on a rich fuel mixture since not enough air is getting into the engine and hence, more consumption.

Not surprisingly, the motorcycle mileage or the fuel efficiency will start going down.

Exhaust popping or misfiring happens whenever there is an unburnt fuel present in a high flowing exhaust.

And unburnt fuel in the exhaust occurs whenever the engine is not able to burn the fuel completely – the most common reason being a rich air-fuel mixture in the engine. With the limited air supply, there is too much fuel to burn and produce energy.

As a result, this unburnt fuel in the engine exits through the exhaust valve and detonates in the exhaust system. Thus, causing exhaust popping.

Now, the exhaust misfiring or popping can also occur in high airflow exhaust system motorcycles. But, the presence of unburnt fuel is always required for detonation.

The combined effect of the engine running on a rich fuel mixture, incomplete fuel combustion, and unburnt fuel is the engine producing a reduced power output.

Without the right amounts of air, the engine combustion process was always going to be an un-smooth affair. The incomplete burning of the fuel is bound to take a hit on the engine power output.

So, needless to say, the motorcycle will suffer from a decreased power from the engine whenever the air filter is clogged up.

A clogged filter can also cause poor acceleration and power lags.

Power lags are basically the motorcycle not accelerating despite you throttling up. Power lags usually happen at higher speeds.

Whenever your vehicle has a clogged air filter, the filter will not let a sufficient amount of air into the engine. So, the absence of a good amount of air for combustion is always lacking.

This problem becomes much more noticeable and significant at higher speeds. The acceleration problems will start to arise. You notice power lags. Uneven speed-ups despite throttling the motorcycle. All because the engine does not have the required air. Damn that clogged filter!

#6: Black smoke from the exhaust

This is not a common case. But still, don’t be surprised if you start noticing black smoke coming out of your motorcycle exhaust.

The reason here is the accumulation of unburnt fuel and its subsequent detonation when coming in contact with the air.

In addition, the fuel detonation in the exhaust will raise the temperature. The motorcycle exhaust will start to overheat – much more than usual. So, there is that too.

A clogged air filter is a mess over time resulting in all these sorts of inconvenient annoyances. So, it’s better to change or clean them up regularly.

Lastly, the fuel detonating in the exhaust will have an added effect of a pungent fuel smell coming from the motorcycle exhaust.

Add to that, the exhaust gases will also comprise a decent amount of unburnt fuel. Not all fuel gets detonated in the exhaust. Plus the exhaust gases. Over time, you will start to notice a pungent smell near the muffler.

Can you ride a motorcycle with a clogged air filter?

Technically, you can. But riding a motorcycle without an air filter will damage the engine.

The dust, dirt, and contaminants in the air will enter the engine and start accumulating to form deposits. Eventually, these deposits will wear off and harm the engine components.

The engine cylinder walls – the inner lining will be the most susceptible for damage. Followed by piston and piston rings. If run for a long enough time without any air filter, the engine will fail eventually too.

Can a clogged air filter cause engine overheating?

Not really. A clogged air filter will not cause too much engine overheating.

Is no air filter better than a clogged one?

A clogged and dirty air filter is still better than no air filter. This is because having no air filter while driving your motorcycle can result in air dust, dirt, and other contaminants entering the engine.

The accumulation of dirt over time to form sludge and deposits will harm the engine. The cylinder inner walls, piston, and piston rings will all get damaged. Even the engine might fail after some time.

How often should you change the air filter?

The air filter in a motorcycle should be inspected every 3000 miles and should be changed every 12,000 miles of distance traveled.

The air filter change interval will vary depending on riding conditions, especially in dirt roads and dusty environments. It is always better to inspect the air filter regularly and check for symptoms to know if your motorcycle needs a new air filter.

What Happens If The Engine Gets Too Much Air?