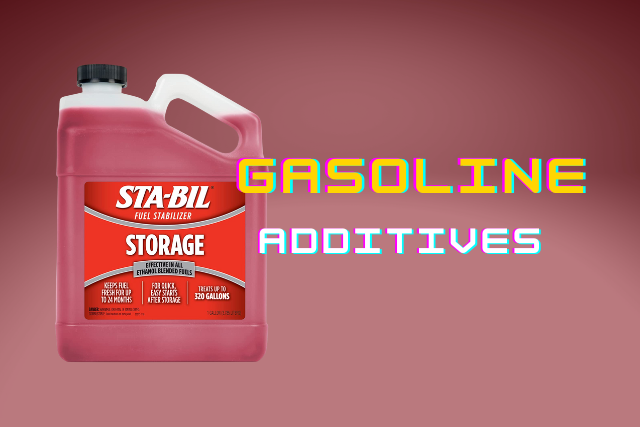 Gasoline additives make up for 10-20% share of gasoline. These additives are helpful to enhance the engine performance – leading to better combustion, fewer deposits, and better health of the engine.

Here are the typical additives added to gasoline for better performance:

Let’s dig deep into each of these gasoline additives one by one.

Knocking arises because of uneven combustion of the fuel inside the engine, giving way to a weird thudding noise. The air-fuel mixture in the engine does not burn smoothly leading to uneven shocks in the engine and hence, the noise.

This noise along with the entire uneven combustion is called knocking. If knocking continues, it can damage engine parts like the valves and the piston. The heat is lost as well, leading to poor engine performance.

And that’s why anti-knocking agents and additives are added to gasoline to prevent engine knocking.

These anti-knocking agents reduce the engine’s knocking and increase the octane rating by raising the temperature and pressure at which auto-ignition occurs.

The lead alkyls tetraethyl lead (TEL) and tetramethyl lead (TML) are the two most widely used anti-knocking agents. However, there has been a reduction in their due to these agents containing lead.

This problem with lead usage has given rise to ash-less antiknock additives, such as N-methyl aniline (NMA), amines, N-nitrosamines, iodine, selenium compounds, etc.

And you don’t want gum formation in gasoline. Nor do you want any free radicals or chain reactions.

Antioxidants are organic chemical compounds that decrease the oxidation and gum-forming tendencies of fuels.

Antioxidants provide stability to gasoline since they reduce volatility by preventing these chain reactions. Hence, they are also called Stabilizers.

Antioxidants play a vital role especially when the fuel is stored for longer periods of time.

The two most common antioxidants used today to control the gum formation in gasoline are – hindered phenols and phenylene diamine.

Commercial gasoline will always have traces of water in it.

The source of contamination is many. Even as simple as moisture from the atmosphere can be picked up by gasoline.

This moisture in gasoline along with the air (oxygen to be precise) attacks the iron and other metal layers in the fuel tank and engine components to cause corrosion.

The extent of corrosion or rust formation depends on the temperature, humidity, exposure to the environment, and duration.

The rust formed can clog fuel filters and carburetor or fuel injectors and adversely affect the engine performance.

That’s why corrosion inhibitors are added to gasoline to prevent rust formation on metal surfaces.

As for how these additives work, the corrosion inhibitors prevent the adsorption of oxygen or water molecules on the metal surface.

One key thing to note here. These corrosion inhibitors work effectively when there are only traces of water and moisture present.

In an aqueous system, where the water content is heavy, the same corrosion inhibitors cannot be used since they are rendered ineffective by the high water content.

Take the carburetor for example. If the gasoline deposits start accumulating on the carburetor throttle and in the venturies, the air-fuel ration entering the combustion chamber is disturbed. As a result, either you will have a lean air-fuel mixture or a rich one – both leading to suboptimal fuel combustion.

The same issues occur when deposits build up on the fuel injector nozzle and intake valves. Not to mention combustion chamber deposits, which can be even worse.

That’s the reason detergents or deposit control additives are important. It shouldn’t surprise you when detergents share is about 40-50% of all the additives used in gasoline.

As for how these deposit control additives work, they have two vital components carrying different functions.

The first component, a long hydrocarbon tail, helps the detergent to be soluble in gasoline, or even other fuel or oil when the detergent additive is added to them.

The second component, a polar amine head, on the other hand, attracts and keeps impurities from depositing. These impurities range from water to metals to varnish to dirt.

The polar head has the ability to attract a diverse range of impurities and keep them afloat. Thus, preventing these impurities from forming deposits.

These impurities range from metals to salts to water to dirt. They are prevented by the deposit control additives from forming sludge, soot, oxidation products, and other deposit precursors from harming key engine parts.

Are gasoline additives worth it?

Gasoline additives are definitely worth it. They help in improving fuel combustion, reducing the deposits formed in the engine components, maximizing power output, and overall improving engine health and durability.

Gasoline additives are already added by the refiners and retailers themselves. The gasoline you fill for your vehicle in the gas station already has additives added to them.

But, if you want to address specific issues like engine knocking or deposits in your vehicle, you can add corresponding additives to the gasoline to address the issue.

Can gasoline additives damage the engine?

Gasoline additives do not damage the engine. These additives are added to gasoline specifically to enhance fuel combustion as well as reduce any negative impact of gasoline on the engine components.

Be it reducing the deposit formation, reducing knocking, improving flow, and combustion, or preventing rust formation – additives help gasoline to improve combustion with as minimal damage as possible.

Why Are Detergents Added to Gasoline? (Explained!)

Why Do Spark Plugs Get Carbon Build Up? (Explained!)