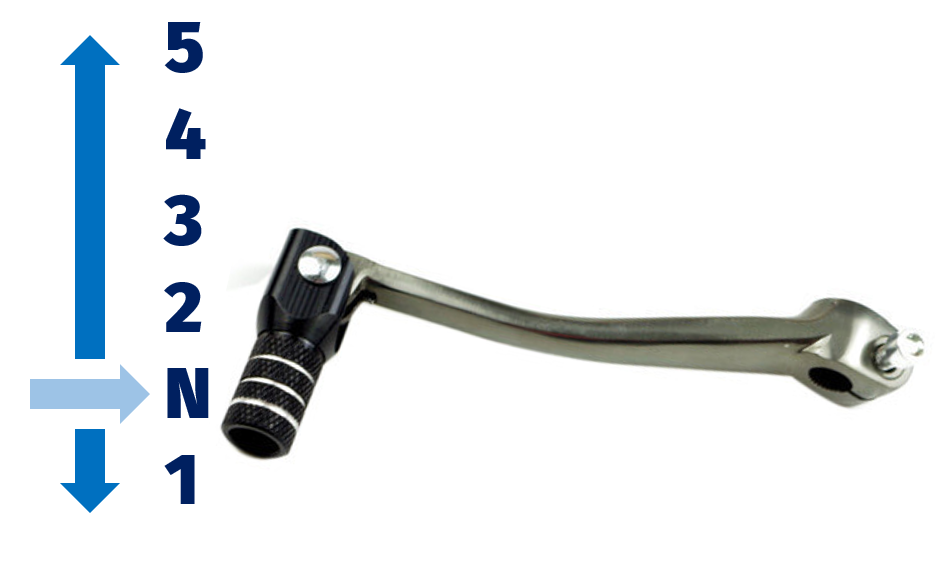 You must have noticed that in your motorcycle, the first gear is down and the rest gears are all up, with the neutral gear placed between the first and second gear. The reasons are more ergonomic than technical for such a placement.

So, what are the reasons why the first gear is down in a motorcycle and the neutral gear is between the first and second gears?

While there are no strong technical reasons, there are, however, there are ergonomic and logical reasons for such an arrangement which are as listed below.

If you are caught in an emergency situation, you would continuously shift down the lever to reach its lowest point in panic. And having the first gear at the bottom is a far better and safer option than the neutral gear.

If neutral gear was the lowest gear in position, during the emergency when you press down to the lowest point and land at neutral, you will be left with no power transmitting to the bike. The engine will make a roaring sound adding to your anxiety, and also not providing any power to the bike.

Having the first gear as the lowest point will still keep the motorcycle moving and you will still have the control for your motorcycle. In these situations, you would ideally want to be in a gear that is still engaging the engine and at the same time, moving at a very low speed.

Take the case of driving down the hill, for example. You are feeling that the brakes are not working. You panic. And start shifting down the gears continuously without keeping any count. If the lowest gear is neutral, you would land on neutral and then realize to shift up to keep moving. So, you shift up again in panic. There is a possibility that you move to higher gears again.

However, if the first gear is at the lowest position, your panic down shifting of gears will lead you to the first gear. A far safer alternative since you will keep moving at snail pace and at the same time engaged with the engine.

So, for these better safety reasons, the first gear is preferred at the lowest position of the gear shift lever rather than placing the neutral gear at the bottom.

#2 First Gear Is Not To Be Used For Driving

The primary function of the first gear is not for driving, but to move the motorcycle from rest to start.

Unless you are stuck in a steep uphill, you hardly use the first gear to drive along. The placement of neutral gear between the first and second gears, signals the rider subconsciously to drive from the second gear.

Whenever you are decelerating, you ideally want to go to the 2nd gear. That’s the lowest gear the manufacturer wants you stay on while driving the motorcycle. The rider can feel it too. Driving in first gear is scratchy at best. The smooth running of the bike starts only from the second gear.

And for these reasons, the first gear which is used to move your motorcycle from the resting position to start, is differentiated from the other gears. The neutral gear placed in between signals the rider to use the first gear only for starting and for driving purposes, start from the second gear.

Imagine you are stuck in a traffic signal. You have placed the gear to neutral since the signal is red. When the signal has turned green, you want to start moving the motorcycle by shifting the lever to the 1st gear. Only when you have gained momentum from the first gear, you would want to switch to the 2nd.

However, if your gear shift pattern had neutral below and the rest gears are all up, there is a chance of you accidentally shifting the lever up twice. The motorcycle will abruptly go to the second gear instead of staying in the first, and will not move with the possibility of your bike stalling.

In all the motorcycles with N12345 gear shift pattern, either all down or all up, the rider can make the mistake of shifting the gear lever twice and trying to pull away in second gear.

In the one down and rest all up gear shift pattern of 1N2345, on the other hand, there is no possibility of the rider accidentally shifting to the second gear. The down shift will undoubtedly take you to the first gear, without any chance of pulling away in second gear.

The first gear, on the other hand, does not have any shortcuts to reach. Shifting down from the higher gears by continuously pressing down the shift lever is the only approach. And you need the first gear every time you want to slow down abruptly yet at the same time continue moving forward.

For these reasons, having the first gear as your landing gear is far more advantageous for the rider as opposed to having the neutral gear as the landing gear.

Do comment if we have missed any important reasons for such a placement in the gear shift pattern.

Fuel Injector vs Carburetor In A Motorcycle – Which is Better?