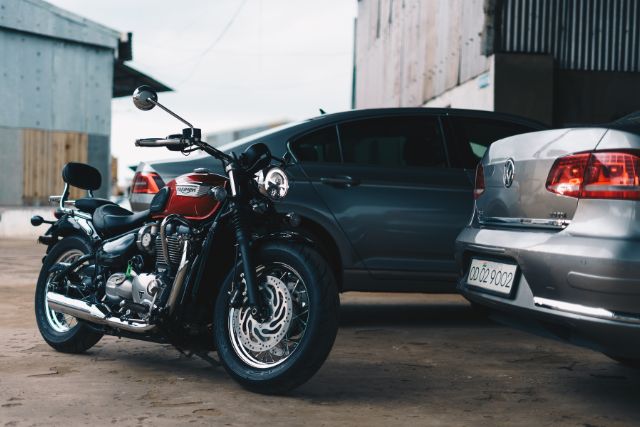 I am not a big fan of Harley-Davidson. Part of the reason is their motorcycles are too loud for my liking. Harleys aside, motorcycles in general are louder than cars.

Here are the reasons motorcycles are louder than cars:

As for why motorcycle riders love the loud sound, it’s the thrill and coolness factor for sure. Many believe loud sound saves them from accidents, which is debatable. But many riders do believe in it.

Let’s deep dive and discuss the topic in detail.

Reasons why motorcycles are louder

Muffler design and aftermarket modifications are the main reasons why motorcycles are louder. There are some other reasons too.

So, let’s dig into each of these reasons.

Motorcycles use straight-through mufflers. These are absorption-type mufflers. They moderate noise by absorbing it into a soft material.

Cars, on the other hand, use chambered or turbo mufflers.

Chambered mufflers are reflection mufflers. They reduce the noise by reflecting and canceling out the sound waves.

Turbo mufflers reduce the engine noise by both reflecting and canceling the waves as well as absorbing the sound waves.

To know more, here is our explainer on how different mufflers work.

In terms of noise reduction, turbo mufflers are the best. And straight-through mufflers which motorcycles use are the least effective.

But, straight-through mufflers are simple in design and are not bulky. This suits motorcycles the best. You cant fit a complex and bulky turbo muffler in a motorcycle. Such heavy exhaust is not feasible at all.

That’s one of the reasons why motorcycles are louder than cars.

Since cars usually have longer mufflers, noise suppression will be higher in cars as compared to motorcycles. Motorcycles have shorter exhaust pipes when compared to cars.

That’s another reason why cars are usually quieter and motorcycles are louder.

Motorcycles have open engines as opposed to cars which have enclosed engines.

The effect of open engines in contributing to the loud sound is not entirely clear. But you can’t deny the open engine contributes.

Although most of the sound is coming from the exhaust, the open engine in a motorcycle will add to the noise as well.

Continuous piston movements, fuel burning, and energy release – are all factors in the engine. No doubt the sound will be louder as opposed to the engines which are enclosed in a casing.

Since motorcycles have open engines (or bare minimum casing), they add to the loud noise. Compare that to cars which have enclosed engines and are quieter.

#4. Loud and cool by design

The loud sound (at least slightly louder and not ear-piercing louder) is part of motorcycle attraction.

Since many motorcycle riders love the sound, most motorcycle manufacturers keep the vehicle sound fairly loud as well.

Looking at you, Harley.

And you too, Hayabusa.

Many motorcycle models are designed to specifically have a high sound. The loud noise, whether you like it or not, is considered cool by many.

Many motorcycle riders opt for exhaust modifications. Be it straight pipe, slip-on exhaust, or even complete exhaust overhaul, the modifications will change the decibel levels.

And here is the deal.

Most bike riders would rather their motorcycle become louder than quieter.

As a result, almost all aftermarket exhausts make motorcycles even louder.

Straight pipe exhaust modification makes the motorcycles too loud. Slip-on exhaust can go either way depending upon the modification. But mostly, the louder way.

Look, aftermarket exhausts can definitely be quieter. It’s just that not many riders opt for it.

Not all motorcycles are louder

Most new motorcycles are not loud. Not at all when compared to the 70s and 80s classic models.

Over the decades, exhaust noise levels have decreased gradually.

As for why is that? Two reasons:

This is a hot topic. And a polarising debate.

One section of motorcycle riders believes loud sound indeed makes riding safer. Lots of cars and trucks do not look out for motorcycles and are involved in accidents. Motorcycle riders are obviously more affected by these crashes.

These set of riders believe that however many people complain, the loud noise from their bikes keeps them safe. Car and truck drivers notice them for sure now.

The other end of the argument is loud noise does not make a difference. Besides, motorcycle riders can use their horns. They can honk anytime they see other vehicles closing in on them.

In addition, studies suggest that loud exhausts do not have much impact on accidents. In fact, even the noisiest motorcycles tested can hardly be heard inside the car.

Either side is stubborn and is not open to the other end of the debate.

Personally, I am not a big fan of loud exhausts. So, I like to believe riders who install loud aftermarket pipes do it for the thrill but claim it for safety.

How to make the exhaust quieter?

If you don’t like loud motorcycles, here are a few of the modifications you can go for to make the exhaust quieter.

For more details on the modifications, here is our detailed post on how to make the exhaust quieter.

Can motorcycles be quiet?

Of course, motorcycles can be quiet. Many modern motorcycles are far quieter now compared to the old motorcycles from previous decades. You can make your motorcycle further quieter through aftermarket exhaust modifications.

Why do people love loud motorcycles?

Many motorcycle riders love the thrill of loud sounds coming from their bikes. It is a cool factor for them. There is a debatable (highly) safety aspect as well. These riders believe loud motorcycles help in avoiding accidents.

How loud is a motorcycle allowed to be?

The regulation on how loud motorcycles can be varies from region to region. As a thumb rule, if the motorcycle noise level is above 90dB, then it is non-compliant in most places.

What Motorcycles Do Keanu Reeves Own? (Top 10)

How to Make the Motorcycle Exhaust Quieter? (6 Methods)