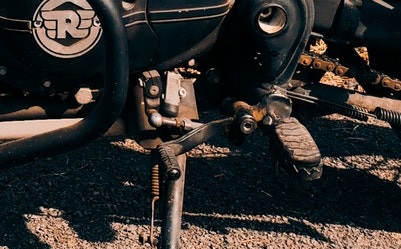 Gear shifting is fun. That’s what differentiates our love for motorcycles from the gearless scooters.

At the same time, gear shifting can be a pain in the – you know. We always crave for a smooth and fast gear change over clunky, brash, and hard shifting.

So, here are 5 easy tips to shift your motorcycle gears smooth and fast:

While some of these are pretty common, some can be quite useful. Depending on whether you are a beginner motorcycle rider or an expert, these tips can be helpful in different magnitudes.

Let’s dive right in to discuss each of these.

#1: Throttle down slightly while pulling in the clutch

Whenever you change the gears, the usual protocol is to roll down the throttle slightly while pulling the clutch in. And then go for shifting the gears. Releasing the clutch comes last to complete the gear shifting.

I am still surprised how many out there those do not roll down the throttle at all while pulling the clutch lever in during a gear change. That slight deceleration due to throttling down helps. The disengagement of the current gear is much more smoother and swifter.

So, next time you change the gears, try rolling the throttle down to decelerate slightly. The gear shift should be far smoother especially if you couple up with the next tip.

#2: Throttle up slightly while releasing the clutch

Next. Once you have changed the gears with the clutch pulled in, you will now release the clutch lever to start moving in the newly shifted gear. This time, along with releasing the clutch lever, roll up the throttle slightly to give a nudge to move with speed.

I can say for sure this slight adjustment in gear changing will make the entire gear shifting process smoother. It definitely did for me. And I am hoping it will do for you too in case you don’t do this already.

So, throttle up to accelerate a bit while releasing the clutch next time. The gear shifting process will go far better than the usual ones.

Helpful read: how to find the neutral gear on motorcycles.

#3: Don’t use a half clutch for gear change

The half clutch is when you pull in the clutch lever but not in full capacity. You are pulling in somewhere halfway so that your motorcycle is not in neutral mode yet.

Half clutch has its uses. It is incredibly useful while driving uphill or on slopes. But on a regular road, changing gears with a half clutch is not the best way to do things.

Many bike riders in fact shift gears in half clutch. They get either too lazy to pull the clutch all the way in or are in too hurry to change the gears they just don’t bother. This is not the best way to go about it.

Shifting gears in a half clutch will more often than not will result in hard and brash gear engagement. Over time, such brash engagements take their toll on the gears and the gear drive. So, avoid changing gears in half clutch as much as possible. In fact, don’t use half clutch unless it’s necessary.

#4: Release the clutch slowly once you change the gear

This is more of a best practice rather than a tip. Still, many beginner motorcycle riders who are not too familiar with the slow releasing of the clutch lever post gear change should adopt this.

The problem is that many beginner riders make is they release the clutch in a sudden fashion once they have shifted the gears. Such a sudden release of clutch often results in hard shifting of the gears. And sometimes, even halting the motorcycle.

So, practice slow release of the clutch lever once you change the gears. The gradual clutch release will result in smooth gear engagement in the gear drive. In turn, resulting in smooth gear changing in your motorcycle.

#5: For upshifts, preload the shifter before pulling in the clutch

This is a cool one. Before you go for shifting gears, wherein you roll down the throttle, pull in the clutch, and then shift the gears, try this – move your feet below the shifter and gently apply some pressure up. More like preloading the shifter before you go for the gear change.

Once you have preloaded, now go for the gear change. Throttle down, pull in the clutch, shift the gear, and release the clutch gradually along with throttling up.

I am sure you will notice a far smoother upshift with this preloading over when you didn’t. This works well especially when you are upshifting. While downshifting the gears, there isn’t much necessity for preloading. So, try this trick and let us know how it feels.

What to do when your motorcycle won’t shift gears?

If your gear is not shifting either up or down, then there is a problem in either of these three things that you need to check and address.

For more details, here is our post on what you need to do when the motorcycle won’t shift gears.

What are the reasons for a motorcycle to get stuck in gear?

The gear shifter can get stuck while changing the gears in your motorcycle.

The main reasons for the motorcycle to get stuck in gear can be a loosened chain, poor lubrication, problems in transmission, no proper slack in the clutch cable, or a worn-out chain sprocket.

Within transmission, there can be further problems that are causing the gear to get stuck. These reasons include:

For an in-depth guide, here is our post on why a motorcycle gets stuck in a gear.

What Does an Air Filter Cover Do? (Explained!)

What Do Spark Plugs Do? (Function, Parts, Types)