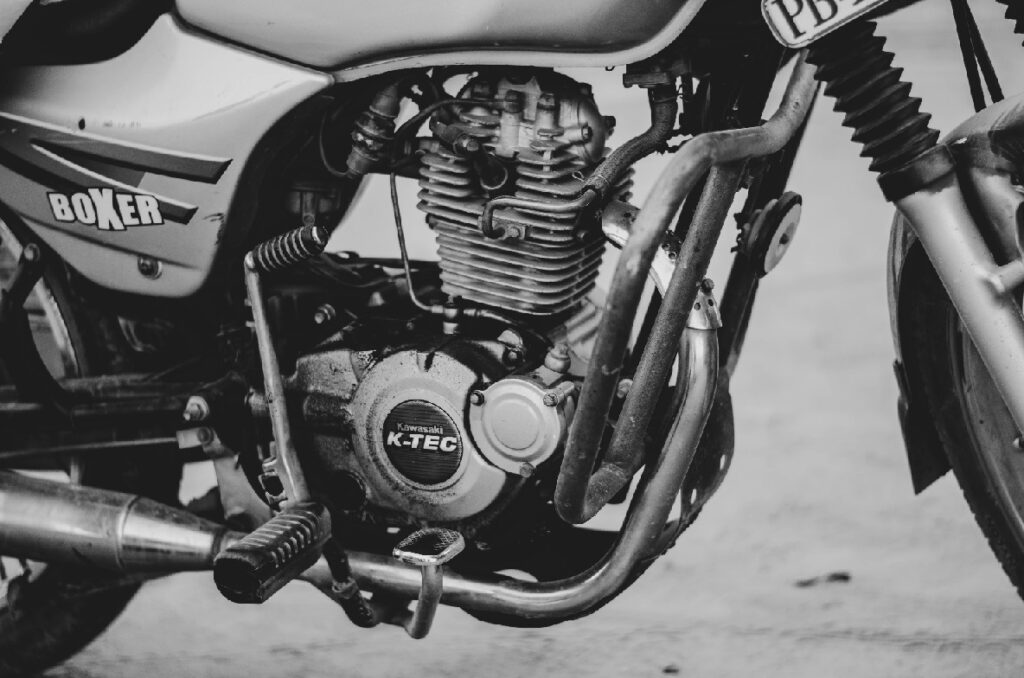 Kickstarting a motorcycle can be a new experience if you have always used the starter button to start your motorcycle. We are so used to not using kick start nowadays. Heck, there are motorcycles now with no kickstarts.

However, in the event of your starter not working fine or due to any other reasons where you want to kickstart your motorcycle easily, here are some simple steps.

How to Kickstart a Motorcycle

Before venturing into tips and tricks on how to kickstart easily, let us go through the way you need to kickstart your motorcycle.

First, shift down your bike gear to the Neutral position. Generally, your gear will be in first gear while you stop your motorcycle on the last ride. If you have the habit of shifting to neutral gear while halting, good for you. If not, now is the time to shift to the neutral gear position.

Second, hold down your clutch. While shifting to the Neutral gear position, you would have already been holding your clutch. Continue holding that clutch while seated in your motorcycle.

Third, now is the time to kick-start your motorcycle. Push down the kick by your leg to start up the engine.

Once the motorcycle is kickstarted, change your gear position to the first gear. Then, accelerate slowly while releasing the clutch at the same time so that your motorcycle can start moving forward.

Now that we have gone through the motions of kickstarting the motorcycle, let us dive into some simple tips to kickstart the motorcycle easily. Here are the quick tips for you:

Here is the first tip to kickstart easily. Do not push down the kick with full energy from its start point. If you go about this way, chances are most of the energy you put in gets wasted before the kick reaches the resistance.

You might have experienced this as well. You give your all in the kick and all that push comes to a halt resulting in a weak kick to your motorcycle.

That’s why we need to lower the kick to its bottom most point before the resistance starts from the kick.

Lower your kick to its bottom most point first and then push down the kick. Your efforts are trickled down to the kick and the engine starts very easily when you kick after taking it to its lowest point.

#2 Use your Body weight – not just the leg weight

Usually, we rest our left leg on the ground which carries our weight and the right leg which is placed on the kick has to push down to start the motorcycle. This is how things are done no doubt.

However, lots of times our body weight rests on the left leg which is on the ground while the right leg which we use to kickstart does not receive our entire body weight for the push.

All we do is kick with our right leg muscle. This translates in not having enough energy going to the kick and hence, not starting the motorcycle sometimes.

This increased weight will help in pushing the kick down much easier than before and will help in kickstarting your motorcycle easily especially if you are facing problems in starting the engine through kickstart.

#3 Turn the Choke On if necessary

Now, this is applicable only when your motorcycle is not at all starting despite your repeated attempts to kickstart.

The problem could be the engine has not received sufficient air-fuel mixture into the system and hence is not able to start up.

You will appreciate this situation if the motorcycle engine starts as soon as you kickstart but stops after one or two seconds.

If you are facing this problem, then one easy fix is to turn on the choke of your motorcycle and then go ahead with the kickstart. Choke, once opened up, will bring in a higher volume of the fuel mixture into the engine and that should help in starting off the motorcycle easily as and when you kickstart.

#4 Accelerate as soon as you kick

Now, this is something I used to have problems with. I generally used to kickstart and the motorcycle engine starts making the noise, but I wouldn’t accelerate at all. I used to be so busy shifting my gear to the first gear position and by that time the engine would stop again.

This used to be so frustrating for me.

If you have been in a similar position as well, the tip here is to accelerate your motorcycle. Since the gear is in the neutral position or you are holding the clutch, the acceleration should not cause the motorcycle to move.

Once you have powered up the motorcycle, you can then shift up the gear and release the clutch to move.

Hope these tips help you kickstart your motorcycle easily the next time. Nowadays, kickstart is not even required most of the time. The electric starter does a fine job. Heck, few motorcycles don’t even have kickstarts now.

Also, if your motorcycle kickstart is not working, here is a detailed kickstart troubleshooting post.

So, what are the tips that you have learned over time?

Will Motorcycle Oil Work in a Car?